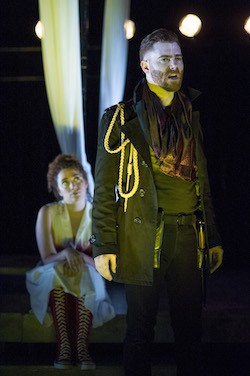 Iago, the villain in "Othello," played by Jared Graham.

“Othello,” a Shakespearean classic expands upon these universal themes, was performed by the National Players who added a contemporary twist in Bondurant Auditorium on Nov. 13.

The production was brought to campus as part of the University Performance Series and the College of Visual and Performing Arts, which brings world-class professional individuals or companies to campus and the surrounding community.

America’s longest running touring theatre company, National Players, featured 10 talented actresses and actors who depicted the story of the celebrated general, Othello, who returned home from war. Upon his return, Othello’s foreign origin and race inspired hatred from several people, including his most trusted friend, Iago, who crafted a deceptive plot to twist Othello’s love for his wife, Desdemona.

Prior to the performance, cast members in Othello conducted a hands-on workshop with Radford University students about the fundamentals – and even more advanced techniques for those that stayed after the conclusion of the workshop – of stage combat.

“This was the first college crowd we’ve talked to so far,” said Simon Kiser, an actor in National Players. “Every student we worked with was uniformly engaged and excited and ready to work. That was really thrilling to be around. When the workshop proper ended, Amy [Desrosiers] and I continued on in an unofficial capacity. We found another space and covered more advanced techniques because they wanted to stay working. It was a tremendous experience for us.” 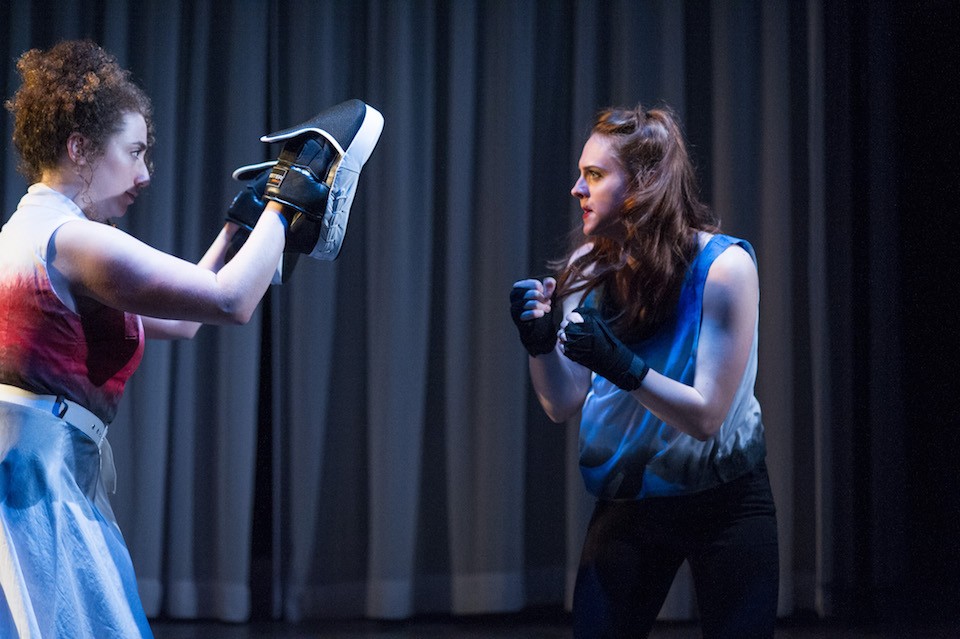 Desdemona, portrayed by Kelsey Godfrey, right, practices boxing in one of the contemporary scenes in "Othello."

After the workshop, theatre students and members of the Radford University community saw National Players examine identity, bigotry and deceit, by combining Shakespeare’s language with modern clothing to transform the drama into a powerful story for America today through a contemporary lens.

“I love performing at colleges because the National Players are a younger company,” said Kelsey Godfrey, who played Desdemona. “We have some people who just got out of college. When we perform in front of a college aged audience, I feel like they can relate to us more because we are around the same age.”

One of the modern twists involved the cast singing Sweet Caroline after the celebration party - a new angle that drew a positive reaction from the crowd. The party quickly descended into chaos, as a drunk Cassio turned the celebration into a bar fight masterminded by the villain Iago. Contemporary liberties - such as the modernized celebration scene - kept the crowd on its toes and highlighted the creative talent of the National Players. 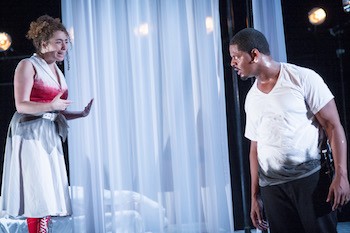 Emilia, portrayed by Melissa Carter, left, pleads with Othello, played by Kenn Hopkins Jr, right, during one of the later scenes in the play.

Robyn Berg, who helped bring the National Players to Radford and assistant professor at the university, said that the themes of the play are resonant in today’s society.

“The player’s aim is for the audience to feel the resonance of this behavior in our own time,” Berg said. “The great William Shakespeare has written a play jam-packed with elements of the human condition. The National Players made that story relevant to everyone who attended tonight’s production.”

Godfrey said that the play is literal with Desdemona’s plotline and character arc.

“It’s abuse,” she said. “It was my personal mission to make sure that that theme is quite clear and not brushed over. I want people to understand what signs of abuse are and be able to say that something like this is wrong after seeing the play.

“In our case, a 6’7” man and this tiny, tiny woman get together and I think that my relationship with Kenn [Hopkins Jr] is really fun and that’s clear on stage,” Godfrey continued. “Both my experience with abuse and my experience with Kenn influenced my take on the character.”

The themes that echo through time – issues of abuse, race, gender and revenge – impact all other characters of the play.

Hopkins – who plays Othello – said that he wanted the entire cast to deliver those moments unapologetically.

“Jason King Jones, our director, selected the play last year,” Hopkins said. “He wanted an African American director, but for whatever reason that didn’t happen. King reached out to me and we added a lot of grit to the play. We talked through all the subjects and made sure that we, as actors, are all knowledgeable and aware of when those moments happen in the play.”

Hopkins stressed that the themes contained in the play are still relevant today.

“They don’t just happen to senators and generals,” Hopkins said. “They can happen to anyone.”