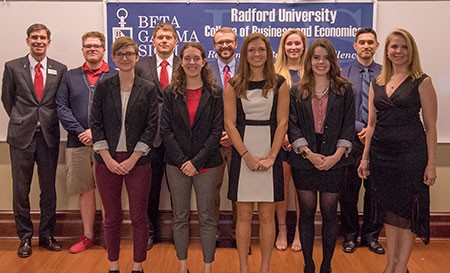 The College of Business and Economics inducted 18 new student members into the Beta Gamma Sigma honor society in a November ceremony.

The International Honor Society Beta Gamma Sigma recognizes academic excellence at the world's top business schools – those accredited by AACSB International, the Association to Advance Collegiate Schools of Business. Since its founding in 1913, BGS has established more than 525 collegiate chapters in 22 countries.

Membership into Radford’s BGS chapter is limited to COBE juniors and seniors who rank in the top 10 percent of their class and MBA students in the top 20 percent.

“Tonight we’re honoring academic achievement and hope that you students will remember this moment and it will be a special part of your academic experience here at Radford University as you will become lifetime members of Beta Gamma Sigma,” COBE Dean George Low said to the inductees.

“We celebrate you and your accomplishments today,” he continued. “There is no greater honor that we can bestow as the College of Business and Economics than to invite our students to join a very special organization, Beta Gamma Sigma, the national honorary for academic excellence in business programs.”

Before students were officially inducted, BGS President Alicia Harris said, “Because of what you have achieved in scholarship and service, we are honored to have you join us.”

Mike Krivensky, a captain in the U.S. Army, was the lone MBA inductee.

“You are truly our outstanding students; you’re students we love to have in class. You all are truly the best of the best,” said Marketing Professor and Radford University BGS chapter advisor Angela Stanton.

In closing the program, Low recognized the BGS officers and noted numerous national and international recognitions of excellence the Radford University chapter has received from the BGS parent organizations. “You have done excellent work and much of that is due to these great officers and to Dr. Stanton,” Low said.

The BGS inductees were among the students recognized later that night at the COBE Fall Honors Program in Kyle Hall 340. Alpha Mu Alpha, Beta Alpha Psi, Omicron Delta Epsilon and Sigma Iota Epsilon also received honors recognition.COBE Outstanding Student Awards were given to individuals who had been selected by faculty as being outstanding in their discipline. Awards were presented to:

In addition, COBE recognized Michael Harris, a senior from Christiansburg, who finished in eighth place among numerous college and university students from around the United States at the Phi Beta Lambda National Leadership Conference competition held June 23-27 in Anaheim, California. More than 1,800 students competed in events at the conference.

“Tonight, we recognize those among us who deserve to be rewarded for a job well done,” Low said.