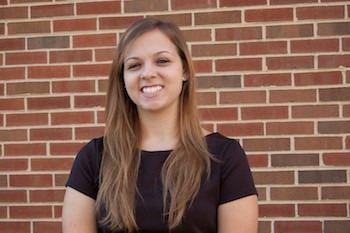 After graduating from Radford University in May, Addie Pawlick, of Chester, completed her first production as lighting designer in graduate school at the University of Houston.

Pawlick, a theatre major at Radford, worked on the production of “Topdog/Underdog,” by Suzan-Lori Parks, and designed the lighting plan and scheme for the show. The play is about two brothers and follows their lives as they cope with each other and various issues, including gambling, poverty and work.

“Many choices in lighting design are based off the set because you need to determine how to light the space you’re given,” Pawlick said. “We switched directors near the beginning of the process. We stuck with the original set, with some minor changes, but had a different director using it, which was challenging. I incorporated the new director’s vision into the original set.”

I got to explore and do whatever I wanted at Radford. That really shaped me on how I was a lighting designer."

Pawlick and Matt Chapman, the director, used lighting and projections to the utmost extent possible – which furthered and enhanced the storytelling of the production. One of the lighting ideas was to widen the floorboards of the set and have light shine through the gaps. 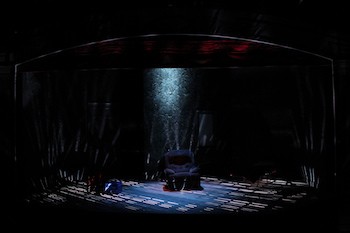 Photograph of a scene from the set of “Topdog/Underdog,” which shows the light seeping through the floorboards. Photograph by Megan Holden.

Pawlick used her education from Radford University to assist her in the endeavor, citing productions in which she participated at Radford helping her along the way. Pawlick said one of her more challenging productions was “The Diary of Anne Frank,” which was performed in October 2016.

“The challenge I had with that play was how to use light that makes a huge stage resemble the small annex that these characters lived in,” Pawlick said. “My professors were very encouraging and allowed me to explore any topic in which I was interested. They allowed me to grow and learn and I think that really helped shape me in to the lighting designer that I am. I learned so much.”

Pawlick is also the lighting designer for Houston’s February performance of “The Last Night of Ballyhoo.”