Students practice the ins and outs of the United Nations 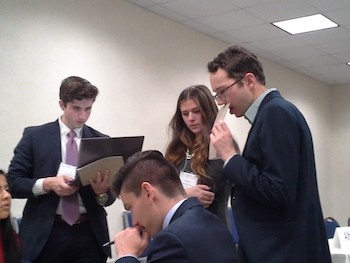 Amanda Paino (center) and Matthew Norcutt (right) work on a resolution during the SRMUN in Atlanta.

“It’s a signature experience for students in college,” Tan said. “They’ll never forget their experience. They will always remember passing their resolution. It’s a unique sense of agency and application.”

Tan was recently elected to serve a two-year term on the SMURN board, which gives her a leadership presence.

“I wanted to be a part of the board to share what I’ve learned over years of doing this,” Tan said. “I want to try to make a difference in the students’ experience. One of my ideas is to help students get more feedback on their presentations. It’s really important for me to have all students get some sort of feedback because that’s how they are able to get better.”

The trip to Atlanta was sponsored by the Scholar-Citizen Initiative, Student Activities, the Department of Political Science, and the College of Humanities and Behavioral Sciences.

Two student delegations were recognized as most improved by SRMUN - Bangladesh on the Economic and Social Commission for Asia and the Pacific, with student Matt Tourbin recognized, and Switzerland on the Human Rights Council, with Mohamed Sidibe and Kayla DeCarlo recognized.

The students covered pressing global issues, including climate change, women’s rights and presence in leadership roles, maritime and land disputes, trade, energy and access to healthcare. In order to discuss and work towards resolutions on these issues, students practiced public speaking skills, collaborated with students from dozens of higher education institutions and become intimately knowledgeable on global issues. 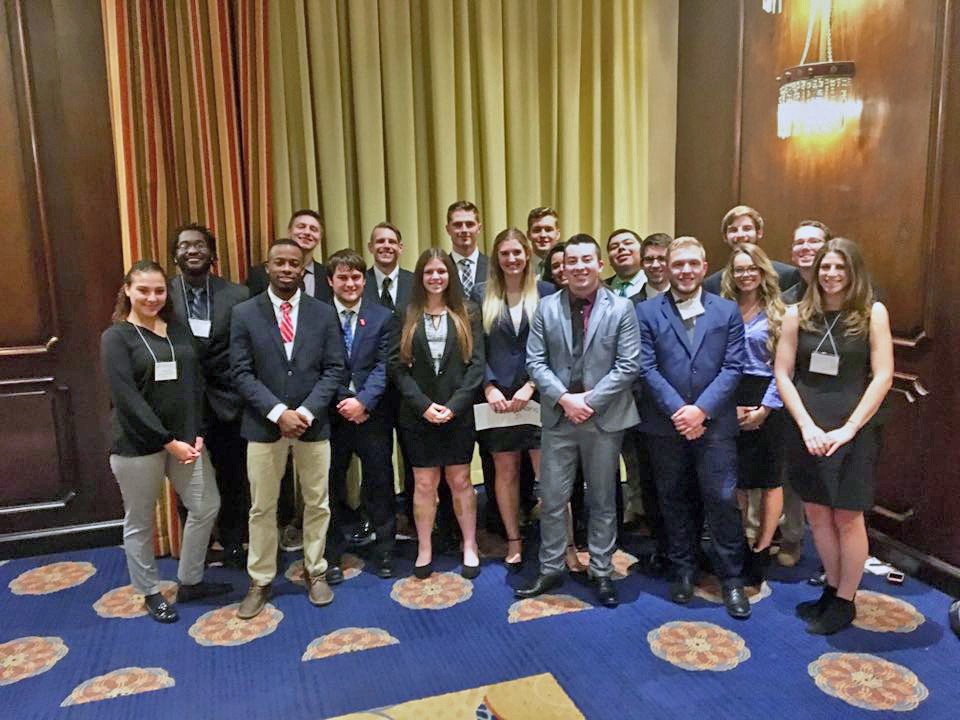 For DeCarlo, of Ashburn, the Model UN allowed her to grow as a person and as a professional. She said that she grew the most from the public speaking opportunities.

“I was worried about the public speaking before I got to the conference,” DeCarlo said. “During the Model UN, I got really confident speaking and putting my ideas out there and using critical analysis skills while being professional and using diplomatic language.”

DeCarlo said one of the biggest challenges of participating in a Model UN was putting personal beliefs aside and following the mindset of the assigned country – which, in DeCarlo’s case, was Switzerland.

One of the issues DeCarlo worked on was human trafficking, an issue that she said is personally important.

“It was tough balancing my personal priorities with that of the country I represented,” she said. “While that issue certainly is important to Switzerland, they are more vested in issues that impact their country to a greater extent.”

Izzie Taveras, of Arlington, attended her second Model UN and got the most of the three-day trip.

“For those three days, all you are doing is public speaking, debating and working on resolutions,” she said. “Everything is going on in real-time, which adds to the realism of the event.”

Taveras said that the feeling of having a resolution passed was “relieving.”

“I kind of saw it coming because the topic wasn’t very controversial – it was about women in government,” Taveras said. “Resolution writing is hard. Everyone agreed on the general nature of the topic, but getting the wording specific enough without being too specific was the hardest part.”

Model UN club president Ivan Thirion, of Mexico City, served on the General Assembly Plenary and said that experiences like this are why he chose Radford University. Thirion’s trip to the SRMUN Model United Nations was his seventh such trip as a Highlander.

“I get to learn something new about all the countries that each delegate represents,” Thirion said. “I have the opportunity to improve my public speaking skills, my negotiation skills and my writing skills - all those basically hard and soft skills I'm going to need to succeed later on in my career.”

Thirion said that the experience allows him to “do what I’m going to do after becoming a public servant.”

“Having that experience outside the classroom was amazing,” DeCarlo said. “You’re interacting with other people in a professional environment. It provides such an educational experience for students.”