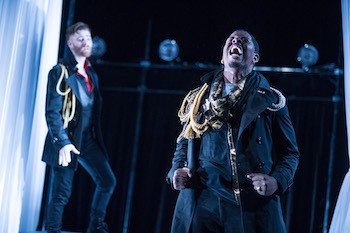 The play features 10 talented actresses and actors that depict that classic story of the celebrated general, Othello, returning home from war – but Othello’s foreign origin and race inspire hatred from several people, including his most trusted friend, Iago, who crafts deceptive plots to twist Othello’s love for his wife.

Jason King Jones, artistic director of National Players and the director of Othello, said that as it is his job to program the season, the plays are chosen 18 months in advance of the actual performance.

“Although I may have control over the mix of plays and the targeted audiences, I have no control over the current events that inundate our news feeds and render these classics more topical and necessary than when I programmed them,” Jones said. “What strikes me most about this play is how deeply intimate the story is, both in its scale of characters and in its action…the story centers around matters of the heart – love, jealousy, fear and hate.”

The play brings these applicable themes to Radford’s campus so the campus community can explore the Shakespearian themes.

“‘Othello’ is one of Shakespeare’s most popular and controversial works and this play is as relevant today as it has been through the last four centuries,” said Margaret Devaney, dean of the College of Visual and Performing Arts (CVPA). “I am thrilled that the CVPA University Performance Series Committee was able to bring a theatre production of this caliber to our campus and community as part of its 2017-18 performance season.”

Full-length performances feature one 15-minute intermission and a question/answer session following the performance.

National Players is the touring program of the Olney Theatre Center, a 501(c)(3) not-for-profit and receives support from the Maryland State Arts Council, the Maryland State Department of Education, and the Arts and Humanities Council of Montgomery County.

The performance will be at 7:30 p.m. on Nov. 13 in Bondurant Auditorium, Tickets are $15 for the general public, $7.50 per child and free for those with Radford University identification.

Tickets are available online at www.radfordactivities.com. For more information, call 831-5420.