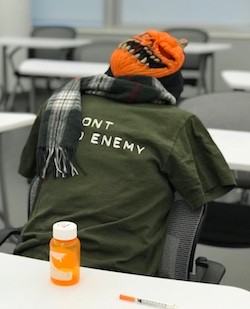 The mannequin victim in the crime scene practicum.

The media greeted criminal justice students as they entered a crime scene practical training exercise at Radford University – and just like that – their practicum was underway.

The Nov. 1 practicum, held in the College of Humanities and Behavioral Sciences building, was part of the Criminal Investigative Theory course, taught by Criminal Justice Professor Tod Burke.  Upon arrival, students encountered cigarette butts, a dismembered mannequin and a bloody note, among other mysterious clues. Their mission was to properly handle and analyze the evidence in an effort to identify the perpetrator who committed the heinous mock crime.

Before the students could truly begin the practicum, members of the media had to be removed from the scene, something that Burke says does happen from time to time in real crime scenes.

“[The media] have scanners so they are listening to what’s going on, so sometimes they will beat the first officer to the scene depending on the situation,” Burke said. “Officers that are responding need to know how to best protect the crime scene to best prevent contamination.”

Professional first responders in the Radford University Police Department (RUPD) volunteered to assist and offered feedback for the students.

RUPD Officers Ian MacInnis and Whitney Gray said that the classroom is the best place to make mistakes, as it is a safe and controlled environment.

“It’s a lot better to make mistakes in the classroom so you can learn from it instead of going out in the field without that opportunity,” Gray said. “People learn a lot from their mistakes.”

Burke said that it is important for the students to integrate theory with actual practice in a controlled environment.

“We are treating these students as if they are criminal investigators, so they’ve been through the process, at least in lecture and discussion, about what the proper procedures are. The difficulty is always the implementation of what they are learning in the classroom – and that’s OK,” Burke said. “I would rather students make mistakes here than out on the street.”

Senior Adam Sinnott, of Stafford, Virginia, was the captain for the exercise and led the team through the practicum.

“This does prepare you for those instances or circumstances,” Sinnott said. “It really does help to be able to do the exercise hands-on and really take it to heart. It’s very different from learning theory in the classroom. Understanding the exact steps and methodology that you have to put into practice – while at the same time not lagging behind – was a challenging experience.”

Abigail Davenport, of Burke, Virginia, did photography during the classroom exercise and said that taking accurate and timely photos is critical to collection of evidence.

“You can have a physical picture of how the scene looks at the time without anyone touching anything beforehand – you have factual proof of how things were at the scene,” Davenport said. “I was really excited when [Dr. Burke] told us we were going to do this [exercise]. It’s better to see and understand in a more serious manner than just being taught in a classroom – I’m actually doing it.”

Following the exercise, both RUPD officers provided advice and praise for the students. Two members of the media also provided critique from a different vantage point. Following the practicum, students said that they were unsure of who committed the crime and said that evidence will be further analyzed before findings are presented to the class.