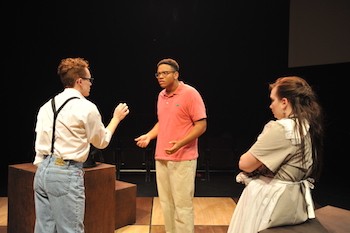 Scene from rehearsal of "Speech & Debate."

The play, held Oct. 25-29, in a campus performance hall, portrayed intense situations in the lives of a small group of high school students.

With the help of Department of Theatre and Cinema Professor Wesley Young, director Chris Phillips led the four-person cast of Radford University students through intense and personal rehearsal sessions, which helped the cast through difficult situations.

The drama, a twisted dark comedy of sorts, follows three misfit teenagers looking for love. Unable to keep a secret, the students discover that a drama teacher in their new school is preying on teens, particularly boys.

The play’s characters are Howie, a teenage boy who is struggling with his gender orientation; Solomon, who is a reporter for the school’s newspaper; and Diwata, an aspiring actress and singer.

McGrath said getting into the role was a familiar experience for her, as she usually plays younger characters.

“In high school, we put on ‘The Lion, The Witch and the Wardrobe’ and I was the oldest person but played the youngest character,” she said. “I’m really comfortable playing these kinds of roles. I look back at myself and see pictures and videos of me performing at a younger age, so I try to meld those together with who I am now to create a genuine and believable performance.”

Josh Garcia, who plays Solomon, said he had to rediscover his early teenage tendencies he had grown out of to deliver a realistic performance.

“There's always going to be a part of that character that is true to you,” Garcia said. “One similarity for me is that I naturally talk fast because I've always liked to put my opinion out there.”

The small cast of McGrath, Garcia and David Ratliff, who played Howie, led to a tightly knit community prior to the show’s performances – a connection that McGrath said helped improve their performances.

“There’s not someone else in the cast who will be able to pick up your slack if the performance is off, so you always have to be on your A-game,” McGrath said. “There’s always a constant push and pull with other cast members, but being around them in rehearsal so much really makes that connection apparent.”

Garcia said that the play was “hard to do at first because you always have to be focused on the audience as well as on yourself and your fellow actors.”

“We're in an arena stage setting, which means there’s an audience on all sides of the stage,” Solomon said. “‘Speech & Debate’ had a quick turnaround of about a month and a half, which put pressure on us during rehearsal.”

Rehearsal started in mid-September and involved an enormous amount of work, including a fight call for a slap heard around the theatre.

“It’s not a slap you can fake since the theatre is small,” McGrath said. “We spent a good 20 minutes working on the slap to get it just right. For me, it’s very important to have a fight call so I don’t mess up the slap.”

Garcia said that the slap startles the audience every time.

“I’m secluded in my own space – I’m sick and throwing up in a trash can – when the slap happens, but the audience gasps each time,” he said. “After the play, the audience said the slap sounded so real because it was loud and sharp.”

Unlike plays with a larger cast and more separation between the stage and the audience, McGrath’s slap had to be real. Anything less than a genuine slap wouldn’t have been realistic for the audience.

“I had to carefully slap on the jawline, which gave it the sharp and loud sound,” McGrath said. “If my placement was off even by a little, it would’ve been painful.”

Visit the College of Visual and Performing Arts web page for a full list of upcoming events.