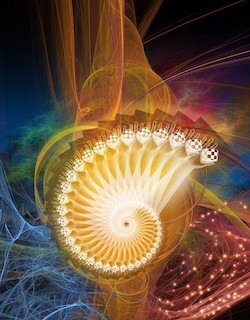 The abstract created by Assistant Professor John O'Connor for the Neuromotor Research Clinic.

The combination of medical science and art is realized in the graphical work created by Radford University Department of Art Assistant Professor John O’Connor.

The artwork created by O’Connor is part of “Research in the Abstract: Visual Art Inspired by Scientific Research” show on display from April 10 to July 31, part of the Virginia Tech Carillion School of Medicine in Roanoke. O’Connor was selected to represent the Neuromotor Research Clinic.

“I love the marriage of art with science. When I was a kid, I was highly influenced by the Golden Nature Guide books that talked about dinosaurs and space – and all the illustrations relating to those topics,” O’Conner said.

The pairing of science with art initially led O’Connor to seek a career as a science fiction illustrator. Now, as an art professor, O’Connor freelances to pursue combination of art with science, which includes working with Hughes Network Systems, Pfizer and other various technology and medical entities.

O’Connor “jumped on the opportunity” to create an abstraction for the Neuromotor Research Clinic. The clinic works with people, primarily children, who have brain damage on one side of their brain. Patients, who have issues using parts of their body, go through rehabilitation by limiting the use of the mobile part of the body.

“They do very focused and intense therapy to rebuild those [connections],” O’Connor said. “Bit by bit, the patient learns how to use the damaged part of the body.”

O’Connor intertwined the work of the clinic in his artwork.

“On the left side, you’ve got what appears to be nerves, but they are lifeless. Nothing appears to be going on,” O’Conner said. “On the center piece, you’ve got the spiral and you can see from the file that it is a small hand holding an object and it’s repeated over many times. It’s the golden spiral, based on Fibonacci’s Sequence, which is found frequently in nature.”

The abstraction shows the changes that occur to the brain through intense therapy.

“The background is an abstraction of a brain scan,” O’Connor explained. “There isn’t much going on, but as it moves to the right, it starts to fire again."

The spiral represents the intense therapy undergone by the patients using the body’s own natural ability to heal, which is just one of ways in which O’Connor communicates with the viewer, a trait native to his work.

“I’ve been trained that way,” O’Connor said. “Sometimes it’s hard to separate that from the art. It still had a sense of communication to it, which really drew me in. Since I tend to be more realistic, I used tools that forced me to out of being realistic.”

One of the tools used was a program called Apophysis, an open-source fractal generator, which allowed O’Connor to randomly generate hundreds of fractals, which he picked and out and arranged. The rest of the abstraction took shape after the placement of the fractals.

O’Connor’s work with the Neuromotor Research Clinic is just one way with which he combines graphic design with science.

“Since I’ve been teaching here, I’ve had the opportunity through summer creative grants to use my artwork to create science-influenced imagery such as the 3D dinosaur exhibit for the Museum of the Earth Sciences here at Radford and to go back into pursuing that love of art and science, especially science fiction,” O’Connor said.