Following careful deliberation, a decision was made.

A 12-person jury found Ford Motor Company guilty of reckless homicide after one of its vehicles burst into flames in an accident that killed three people on a Virginia highway.

While the trial, Commonwealth of Virginia vs. Ford Motor Company, was only an educational exercise, the facts were real.

Two Radford University faculty used information from a well-known case from nearly 40 years ago to build an innovative mock trial course this semester for criminal justice and business students. 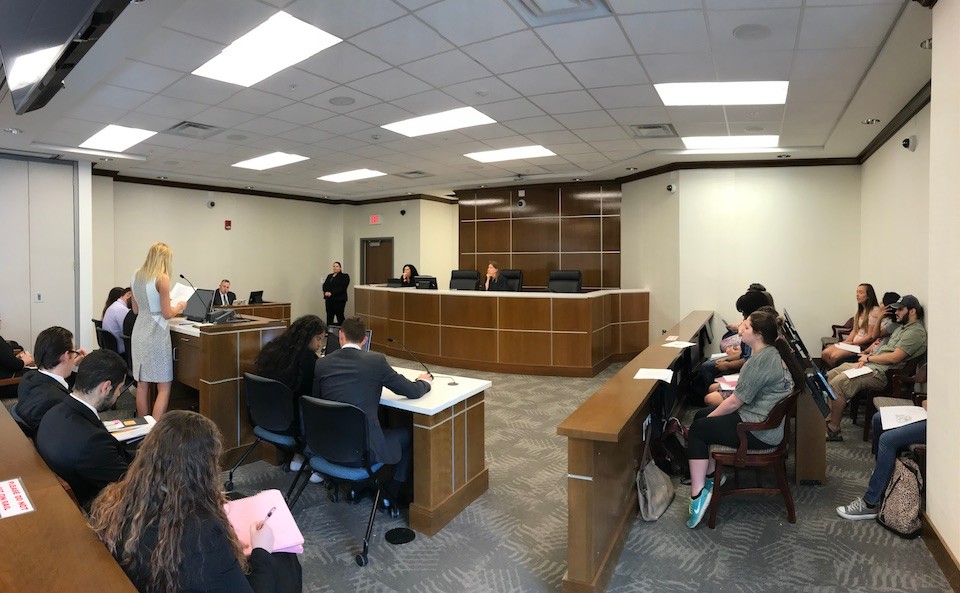 Students used a fact pattern based on the 1978 criminal trial of Ford Motor Company that stemmed from the deaths of three teenage girls after a Ford Pinto they occupied exploded after being struck from behind by a van.

“The reckless homicide criminal charges against Ford for the exploding Pinto were the first of their kind in American history,” said Turmel, a former trial attorney

The actual case, Indiana vs. Ford Motor Co., lasted nearly five months, so Turmel and Wagers were challenged to condense the case’s complex information to make it manageable in 11 weeks.

Before the mock trial, students deposed each witness. “From the depositions, we can prepare the questions we want to ask at trial,” said senior criminal justice major Shadjah Hunt of Woodbridge.

“Witnesses have information that is not in the fact pattern, and it is up to the students to get that information from the witnesses,” Turmel explained before the mock trial began. “Otherwise, they are going to be surprised by it in trial. It’s a learning opportunity for them.”

The jury listens to the witness' testimony.

A mixture of criminal justice and business students made up the prosecution and defense. The case had four witnesses: the van driver, a nurse, a Ford executive and a transportation safety expert.

Testifying on day one was the van driver, played by Katrina Compton ‘91, and the transportation safety expert, Dan Davidson, professor and chair of the Department of Accounting, Finance and Business Law in the College of Business and Economics.

Day one of the trial

Despite the intense preparation, a nervous tension enveloped the students as the mock trial opened inside the new CHBS building courtroom.

Emily Froehlich delivered the opening statement. “I was nervous, but I practiced it a million times and I got through it,” said the junior criminal justice major from Owensboro, Kentucky.

Natalie Tacci was in the process of cross-examining the van driver when the judge spoke up, stating Tacci’s line of questioning made it seem as if the witness were on trial.

“It was a little nerve wracking when the judge cut down my questions,” said Tacci, a junior criminal justice major. “I knew I had to think of another way to get my point across that she [the van driver] was at fault for the accident and not our client.”

Tacci was forced to think quickly on her feet, just as Turmel and Wagers had planned.

The transportation safety expert Jesse Jones, played by Davidson, was questioned on the issue of Pinto’s recalls and safety inspections, as well as the condition of the road on which the accident happened.

“I had three different directions I could have taken them, based on their line of questioning,” Davidson said afterward. 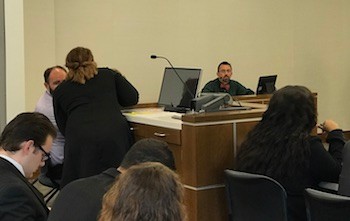 Hall (center-right), played by Wirgau, waits to be questioned by the defense on day two of the trial.

Day two of the trial

Ford Motor Co. started off day two by bringing to the stand Patrick Hall, played by Chemistry Professor Joe Wirgau, a nurse on staff at the hospital at the time of the accident. He painted a vivid picture of the injuries, saying they were “gruesome” and that “at least 95 percent of her skin was burned off. I’ll never forget that.”

The Commonwealth of Virginia unleashed a barrage of questions upon Hall, asked him about narcotic use on the job, job exhaustion and medically-induced comas.

Morgan Williams, the 10-year CEO of Ford Motor Co., was the next witness brought by the defense, who asked Williams about Ford vehicles and if his family would use them.

Williams, played by Radford University alumnus and retired state police officer Dirk Compton, responded by saying, “I would consider it to be as safe a vehicle as there is on the road.”

In deposition, however, the CEO stated, “it was a waste of time to be here.”

The prosecution went after the safety regulations – as well as his deposition statement, citing that the vehicle did not pass a 20-mph rear-collision test.

The defense delivered a closing statement, stating that Ford Motor Co. was not behind the wheel of the van, and therefore should not be held responsible for negligence. The prosecution focused on the fact that the fix to the Pinto’s safety issues, known to Ford Motor Co. prior to the accident, cost $11.

The jury, made mostly of freshmen from Wagers’ introduction to criminology course, was initially split and were forced to quickly deliberate. After a few minutes of discussing the facts of the case, jurors found Ford Motor Company guilty.

“They should’ve focused more on that,” she said. “If they had kept going, it may have swayed me in the other direction, but it just wasn’t enough for me.”

Student experiences during the mock trial

“It gives you that extra sense of realism. If you find yourself working a case, this is the environment in which you are going to be,” she said. “It put a whole different meaning to it. If we were just in a classroom, it wouldn’t have that same intimidation.”

Deric Tilson, a senior economics major from Chilhowie, hadn’t had taken any criminal justice courses prior to the collaborative course.

“There is a lot of complexity to it and a lot of different things go into this,” he said. “Seeing it come together has been a great experience. It’s been really interesting to see how complicated the legal system is and all the steps it takes to get you from a fact pattern to a case.”

Wagers wanted the students to answer a couple questions after taking the collaborative course: What does justice really mean? Is it about who really is guilty or innocent or is it about who puts that better case together?

“They went from getting the basic information together to support their case, to telling a story that was dynamic, interactive and persuasive,” Turmel said. “This was a tremendous growth opportunity.”