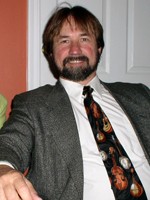 Radford University Geology Instructor George "Paki" Stephenson was featured in an episode of "Secrets of the Underground," a new Science Channel television show that explores strange subterranean locations in the country.

The lake has been mysteriously disappearing for years. Stephenson is a part of Geology Professor Skip Watts' Radford University research team that has been exploring the phenomenon since 2010. They, along with RU geology students, conducted high-tech research into the geology of the ancient lake using a remotely-operated submarine, sonar, electrical resistivity, Unmanned Aerial Systems (drones), mapping and flow monitoring.

A lot of this research and equipment – including spectacular drone footage - supported the show and Nelson's conclusion regarding the lake's disappearance.

"Working with the film crew and Rob Nelson was a unique experience," Stephenson said. "I am impressed with their professionalism. The show turned out well, and they (Rob Nelson) did come to the same conclusion we have had for years, that the lake was formed by a series of landslides, which made a leaky dam. The amount of research the students and we have done, of which they had access to, anyone who studies this will see that if the Scientific Method is followed, the results soon become clear."

Filming for the Mountain Lake segment of the episode spanned over a two-day period in late fall 2016. The episode first aired on Feb. 28.
Watch the full episode here: https://www.sciencechannelgo.com/secrets-of-the-underground/.