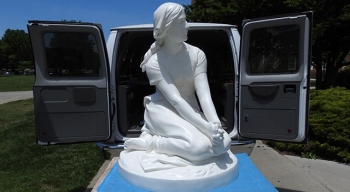 The Joan of Arc statue, located in McConnell Library, was recently restored and returned to campus on June 14. It dates back to 1921.

For almost a century, Radford University's Joan of Arc statue watched in silent, stoic observation as the institution around her evolved into a co-educational campus, filled with thousands of aspiring scholars and state-of-the-art facilities.

This summer, it was her turn to shine.

The historic statue recently underwent months of a much-needed restoration, funded by the Hazel Grove Winesett Endowment from the Radford University Foundation. She arrived back on campus June 14. Her once dull and flawed exterior – a result of 96 years of wear and tear – shown smooth and lustrous white against the backdrop of the blue sky.

Joan was accompanied by the artist responsible for her transformation, Tom Thomas, owner of Fine Line Architectural Detailing, LLC.

“It was an honor,” Thomas said of his work. “This statue is a feature item and certainly inspiring to young ladies.”

Joan of Arc was just a young woman herself when she bravely led French forces to victory in the Hundred Years’ War of the early 1400s. Captured by the English and burned at the stake, she was posthumously pardoned and canonized.

Thomas, of Harrisonburg, also created a new pedestal upon which the regal Saint Joan now sits in the reading room of McConnell Library.

“A lot of artists say such works should be displayed at eye-level,” Thomas said. “But I think she [Joan of Arc] should be looked up to.”

Gifted to the university in 1921, the statue is a life-size plaster replica of Henri Chapu's 1870 "Jeanne d'Arc à Domrémy", a marble sculpture of Joan of Arc that currently resides in the Musee d'Orsay in Paris.

Longtime Dean of Students M'Ledge Moffett of what was then Radford Normal School documented the statue's origins.

"The first degree class (1921) gave a statue of Joan of Arc which was placed in the middle of the landing at the head of the stairs [in Founders Hall]. Comfortable chairs were placed nearby. This spot became known as 'Joan's Room,'" Moffett stated in "A History of the State Teachers College of Radford, Virginia, 1910-1930."

Moffett's account contradicts an intriguing but unfounded legend that sometime around 1918, at least four plaster casts of Joan of Arc were commissioned by the French government to be given to Virginia’s four teacher colleges in appreciation of student fundraising in support of the French cause during World War I. 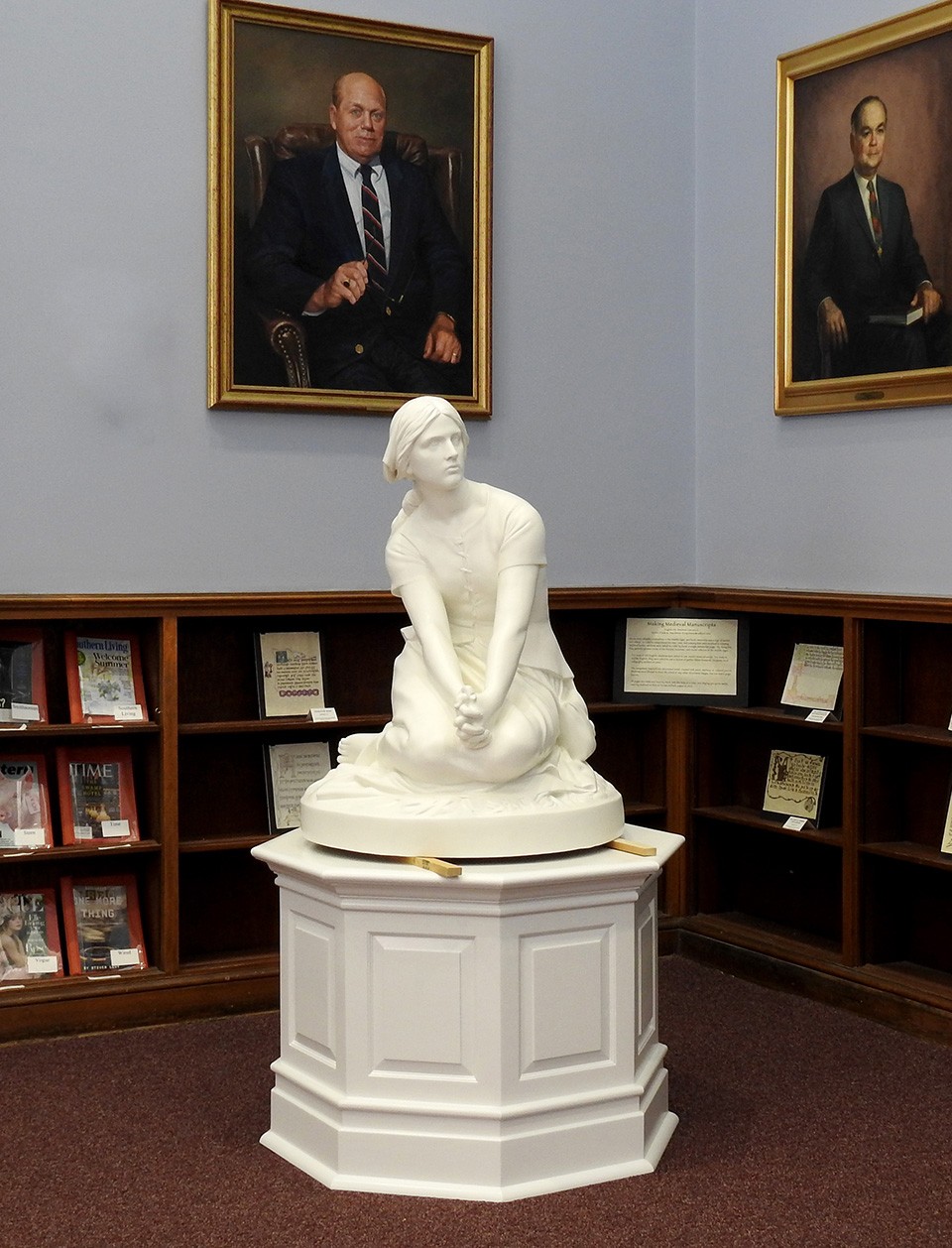 Although not gifts from France, there are four very similar – if not identical - Joan of Arc statues at each of the former women’s teacher colleges: James Madison University, Mary Washington, Longwood University and Radford. They most likely were created and distributed by a Boston manufacturer called PP Caproni & Brother, which reproduced hundreds of classical and contemporary statues in the early 1900s.

“They were able to make fine works of art available to the masses,” Thomas explained.

Hailed a heroine and symbol of strength, Joan of Arc was a fitting addition to the female-dominated Commonwealth campuses, which have since sought to trace their own Joan’s journey. An excerpt from an article written by Mike Lay, titled “In Search of Joan,” presents a rough timeline of Radford’s Joan:

“After years of moving around campus, the statue came to rest in the library during the late 1960s. There she remained until 1983 when she was relegated to storage to make room for the library’s growing book collection. In August of 1992, she was rediscovered in an attic storage room and installed on the porch of Russell Hall. She eventually made her return to the library in September of 1995 on the occasion of the inauguration of Radford University’s fifth president, Douglas Covington.”

The statue sat in the entranceway of the library until this April, when she landed in Thomas’ talented hands.

The two were no strangers.

“This was my third and final date with Joan,” Thomas joked.

Thomas spent hours sanding and stripping the statue down to bare plaster. He referred to this process as the negative phase or “removal of the past.” And what a past she had, Thomas said.

Joan’s statue was missing toes. Her right eye was gouged. A deep scratch stretched across her face. Her fingers, clasped in contemplation, were covered in fingernail polish. Her shell was stained by the sun; her mouth by lipstick.

“That’s years’ worth of weathering, moving, brutalization and intentional and unintentional wear,” he explained.

During the positive phase, Thomas began patching Joan back together. He replaced her missing extremities, filled in gaps with red putty and coated her in a pearly white paint.

“I’m very thorough,” Thomas said, who was making final touches just days before returning her to Radford. “As an artist, I want to be respectful to the intentions of the original creator. He would want me to do that.”

“Joan is a treasured piece of Radford University’s storied history,” said McConnell Library Dean Steve Helm. “By restoring the statue, we’re not only preserving our history, we’re honoring a heroine who fought and died for a cause she strongly believed in. She is very deserving of this, and will now be prominently displayed, visited and cherished by Radford alumni as they return to campus.”

A formal reception will be held to honor the restoration of Radford University’s Joan of Arc statue this fall. Details will be announced at a later date.