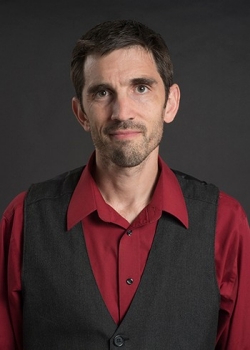 “I create hundreds, sometimes millions, of artificial people and vampires inside a virtual landscape. Each one is unique,” said Farhat, an assistant professor of economics at Radford University. “I give them reasonable rules to follow, usually based on assumptions about how they respond to their environment.”

Farhat then sets loose the vampires and humans to “see what happens,” he explained. “I look at the population demographics and spending patterns in the artificial economic ecosystem and see if it reflects the real economy we see around us.” This is a research method called “agent-based modeling,” and it is growing in popularity amongst social scientists.

Farhat uses the modeling approach in the classroom to ignite a greater interest in the study of economics.

“We economists are trying to help people, students included, get past the math and data normally associated with economics and to work on interesting research,” Farhat said. “I’m trying to pass on the passion of economics through what I like to call scien-tainment, or entertaining science.”

Farhat will speak about his research passion and teaching techniques on the With Good Reason public radio program in an interview that will air June 10-16 on more than 60 With Good Reason stations across the United States. Listeners in the New River Valley can hear the show at 6 p.m., Tuesday, June 13 on Public Radio WVRU 89.9.

Programs also are available as podcasts at withgoodreasonradio.org.

Also on the program, With Good Reason will re-broadcast an interview with Radford University English Professor Jolanta Wawrzycka. In the conversation, Wawrzycka speaks about the life of writer James Joyce, his works and her experiences attending “Bloomsday” celebrations that honor the life of the Irish writer.

With Good Reason has won five Gabriel Awards for Best Documentary or Public Affairs Programs, and is the recipient of top honors from the Public Radio News Directors, Radio and Television Digital News Association and the Virginia Association of Broadcasters.