COBE faculty published in Journal of Economics and Public Finance 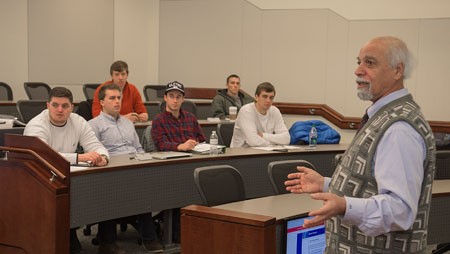 “Keynes’ Unscientific Theory of Consumption Function and Its False Policy Implication for the Multiplier Effect: A Review of Disaggregated Evidence,” written by Nozar Hashemzadeh and Dan Farhat, appeared in the academic journal in May.

The article questions the validity of a “stable and extraordinary” Marginal Propensity to Consume (MPC) and the resulting multiplier effect for all income groups using extensive household data for the United States, Hashemzadeh said.

The research and subsequent article presents significant evidence to demonstrate that the Keynesian’s multiplier effect, which has been universally applied as the building block of fiscal policy decisions since the latter half of 1930s, is a distorted concept.

Hashemzadeh said the article disrupts the robustness of John M. Keynes’ proposition and demonstrates that the whole is not the sum of its parts when it comes to the MPC and the expenditure multiplier effect.

The insights provided by the authors provide teachers and practitioners of macroeconomics “a more accurate description of consumption behavior in the short-run and the long-run,” Hashemzadeh said.

He and Farhat conclude that their research findings “serve to extend students’ understanding of the complexity of the economy and reveal that there are many intricate mysteries that are yet to be expounded.”