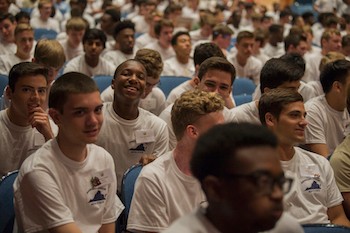 Boys State participants listen to a speaker in Bondurant Auditorium at Radford University.

The political struggle inside American Legion Boys State of Virginia didn’t involve Republicans or Democrats, but rather Federalists and Nationalists.

Radford University, host of American Legion Boys State for the fifth consecutive year, welcomed some of the Commonwealth’s future leaders as they learned about Virginia’s political system and how its government functions.

The abbreviated campaigns featured some of the traditional difficulties in American politics. The model government had the Boys State participants divided into cities, which, in turn, elected their own governments. Each city represented an important figure in American military history.

At the start of Boys State, all participants discussed their political platform. The newly-elected party leaders stood up on the stage and announced the platform ideas.

“We went through the ideas and anyone could go up on the stage and state any opinion they wanted about the platforms,” said Seamus Koehn, a member of Pershing City and the eighth member of his family to attend Boys State. “A vote was held at the end to decide which ones we wanted and which ones we didn’t.”

Mason Tarkenton, a freshly-elected treasurer, also ran for councilman and described the election process as “nerve-racking.” 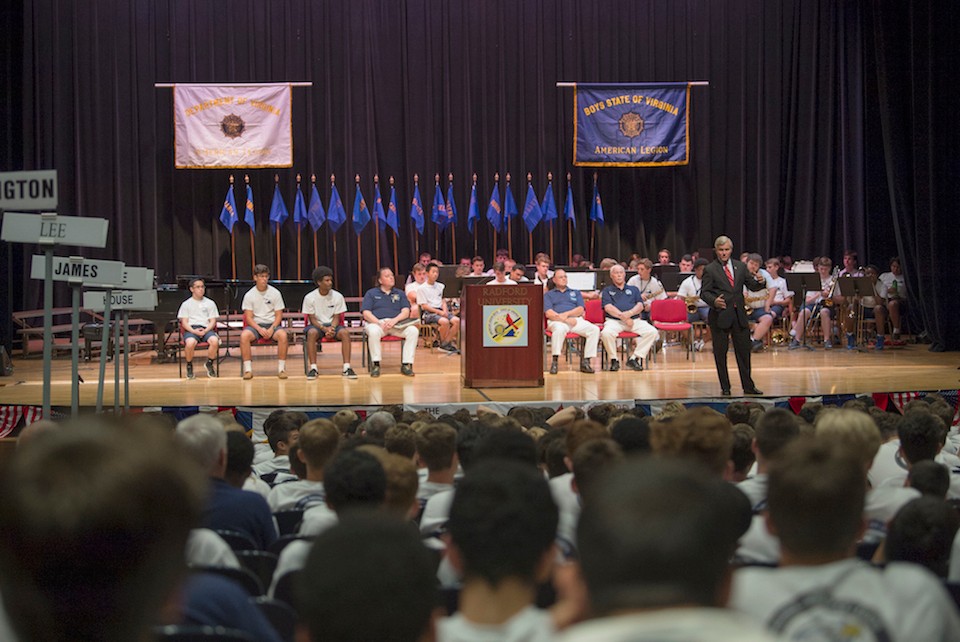 “You have to learn from those experiences, those letdowns,” he said. “You need to build yourself and do better. I ran again for treasurer and made it. I talked to a lot people and I tried to be more open. I put myself out there more. I was talking and campaigning more to get that position.” 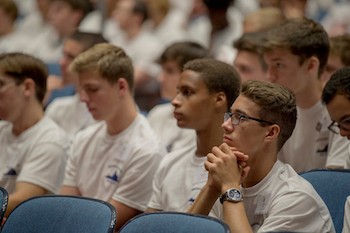 Boys State participants listen to a speaker in Bondurant Auditorium at Radford University.

Ford learned about the nature of politics from both his successful and failed campaigns.

"If you want to get anywhere, you have to be friendly and willing to build bridges instead of break them. You also have to compromise for the greater good, not just for what you want. You can both get to a higher level if you compromise," Ford said.

The participants will take the knowledge and experiences gained during Boys State into their lives, where the experiences will boost the variety of organizations in which they participate.

Former Virginia Gov. Bob McDonnell, who addressed Boys State for the ninth time, praised the participants and the knowledge gained during the week.

"You all, whether you like it or not, are in a rare category of person that has now been recognized for your skills. You are going to be some of the future leaders of Virginia – right here in this room," McDonnell said. "You have exhibited not only academic excellence, but also a kind of character and fundamental skillset that sets you a part from the vast majority of other people. Consider this a great honor."

The 75th session of American Legion Boys State of Virginia concludes on Saturday, June 24, with a ceremony that includes awards and recognitions, a farewell address by Boys State Director Gerald Rhoads and a grand finale by the Boys State Band and Chorus.