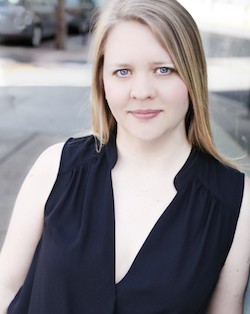 From Virginia, Hood’s passions lie in the works of Shakespeare.

That passion was fully realized when Hood landed the lead role of Hamlet in the Richmond Shakespeare Festival, held at Agecroft Hall, which rests on the banks of the James River. The Tudor-style Manor House was transplanted 3,000 miles away from its original home in Lancashire, England.

“I never thought I’d have that opportunity,” Hood said. “It was the hardest experience of my life. I was very lucky that the other people in the play were people I had worked with before. The experience was very profound for me.”

The play was performed in the courtyard of Agecroft Hall, an experience that Hood called “magical.”

Hood uses that opportunity to teach students about being a lead in a performance.

“Once you’ve had experience, it enables you to put things in a proper perspective for the students,” Hood said. “It allows me to use my experience and pass it along to the students so they aren’t overwhelmed when preparing for a role. If they don’t have the skills or the tools, they can get them and be successful. I hope that my experience will help them and reassure them.” 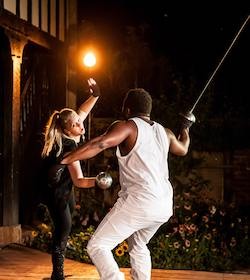 Hood passes along that advice in two sections of Acting I and a course on stage make-up.

The make-up course, designed by Radford Professor Monica Weinzapfel, pushes the boundaries and the understanding of the human face.

Before the students progress to artwork and sources that lack the traditional features of the face, it is important to lay groundwork.

“It’s important to start with something that does have traditional features – even if the features don’t line up with the face,” Hood said. “This allows them to get practice and move on to much more difficult makeup. But I can’t tell them ‘forget what your face looks like! Just forget it!’ because that doesn’t work. They need to figure it out on their own.”

In addition to her four classes, Hood directed the holiday play “Junie B. in Jingle Bells, Batman Smells” in 2016.

Hood’s responsibilities included meeting with the set designer, casting the play and leading rehearsal, which was Sunday through Thursday from 6:30 to 9:30 p.m. for almost five weeks.

As an actor’s director, Hood gives actors freedom to give their characters a unique spin.

“I’m not interested in telling them to move and be exactly a certain way,” Hood said. “Usually, I will come in with my script, with the blocking and movement already done, but when they first get up on their feet, I tell the actors to trust their own instincts. I give them the freedom to have control over the little movements so the show is more natural.”

This semester, Hood is directing a show called “Murder on the Lust Boat,” which premieres in February at The Side Door, located in downtown Radford.

For more information on the Department of Theatre and Cinema, visit its website. To learn more about the School of Dance and Theatre, visit its web page <embed: https://www.radford.edu/content/cvpa/home/dance-theatre.html>.

For a detailed list of upcoming events in the College of Visual and Performing Arts, check out its event calendar.