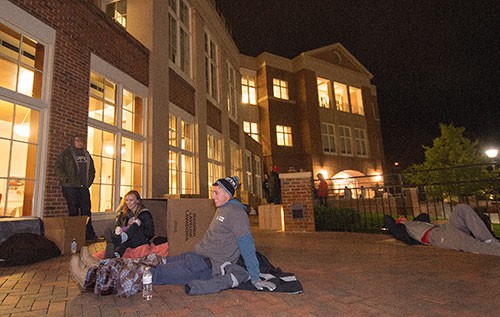 At 1:30 a.m., Jazmine Poindexter was feeling tired, cold and irritable.

The temperature on this late October early morning was 41 degrees and steadily dropping.

“I dozed off for about 15 minutes, but I woke up because I just could not get comfortable,” she said. “Between the lights from Kyle Hall, people talking, the noise of the street and simply lying on bricks for six hours, I was exhausted.”

Poindexter was among more than 70 Radford University students who participated in a class project for Management Associate Professor Danylle Kunkel’s social entrepreneurship course. Throughout the fall semester Kunkel and her students focused on social issues, “but more specifically on housing insecurity issues,” she said.

Kunkel developed the housing insecurity simulation event to introduce her students to the issue and help them gain empathy and “to experience what it would feel like to have to go through this for just one night so they can gain a better understanding of the needs of individuals who are housing insecure.”

To prepare for the experience, Poindexter packed a water bottle, two granola bars and a pack of fruit snacks. “I had a rather small cardboard box that was large enough to protect my head from the wind, and a fleece pink throw blanket,” said the sophomore management major from Williamsburg. “I triple layered my clothing, hoping it would provide insulation.”

The night began at 6 p.m. Kunkel’s students, and a few others earning extra credit in other courses, took up temporary residence in cardboard boxes on the stone patio of Kyle Hall, home to the College of Business and Economics.

Kunkel planned the exercise for a time in the year when temperatures were a little cooler, and she limited the amount of food they could bring along.

The students were limited to one cardboard box, a pillow or blanket, two small meals – “like canned soup or a sandwich,” Poindexter said – and limited cell phone usage.

“I wanted them to experience cold and hunger,” Kunkel said. “That was the only way they would have been able to relate and gain any kind of empathy.”

However, there were no strict rules about accepting food and warm clothing from others, which was also part of the experiment. One student was gifted a sweater, and Kunkel’s family brought pizza.

“This was important because I wanted them to experience what it was like for some people to receive things when others did not,” Kunkel explained. “What does it feel like when someone brings you a piece of pizza? Is that helpful to your situation? Does it change you situation? Does it make you feel uncomfortable?”

Some who received gifts expressed uneasiness, feeling others were left out.

I wanted this class to learn to how to systemically help individuals who need help. Examining issues through a business lens can make solutions more sustainable.

As the evening began, Kunkel guided her students through a privilege walk to examine the complexities of the issue. “Privilege is not only about race and gender, but there are also a number of other things, like support,” she said.

Poindexter received support from many friends throughout the night. “They stayed with me from 8 p.m. to 2 a.m.,” she said. “They willingly sat with me on my cardboard box and endured the wind and cold. It truly touched me.”

When the morning temperature dipped to 37 at 4 a.m., Kunkel gathered the students inside Kyle Hall for an hour-long debriefing.

Days after the exercise, students were assigned to write a reflection paper and develop a business canvas addressing a social issue.

“They had to create a business to address the things they’ve experienced,” said Kunkel, who has social entrepreneurship certification. “Those address many things, not just an idea for a business, but also how to develop funding and the business idea’s social impact.”

As part of the learning experience, Kunkel divided her class into 11 teams, and gave each $5 “to grow as much as they can,” through Thanksgiving.

“I wanted them to take this money and figure out where they can grow this resources,” she said. “They could do anything, such as buying ingredients to make cupcakes and having a bake sale. They could be as creative as they want. Social entrepreneurship must leverage connections and networks and lean on others for expertise they don’t have.”

The students raised $1,647.70 and voted to donate all of the funds to a local housing insecurity shelter. The money was delivered Dec. 6.

During the semester, the class tackled the complexities of housing insecurity and many other social issues. Through the simulation, they gained valuable experiences that can impact their view of those issues, “and it made a tremendous difference for this class,” Kunkel explained.

“I wanted this class to learn to how to systemically help individuals who need help,” Kunkel said. “Examining issues through a business lens can make solutions more sustainable.”