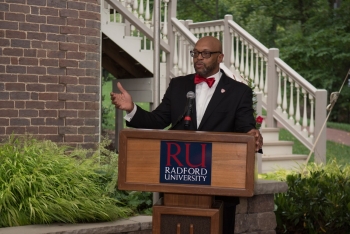 Guests, who also included several university administrators, faculty, alumni and benefactors, enjoyed conversation, networking and learning of the university’s progress and discussed opportunities for collaboration among university and business partners.

President Hemphill introduced George Harvey Sr., a 60-year business owner of Harvey Chevrolet, who acknowledged President Hemphill and spoke of the important partnership between Radford University and the city of Radford.

Harvey, a longtime, dedicated supporter of the university, recognized President Hemphill as a “working machine” and champion of Radford University.

“What he wants is what we [Radford University] need,” Harvey continued. “We are fortunate to have him.” 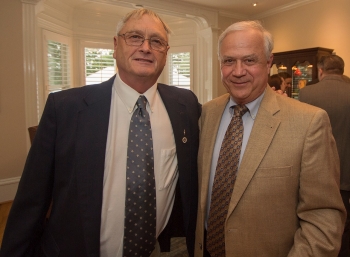 “As you can tell, there are a lot of exciting things going on at Radford University,” President Hemphill told reception attendees. “We are very excited about the work ahead and look forward to working with each and every one of you.”

Caitlyn Scaggs ‘07, founder of Blue Mobius Marketing in Blacksburg, said she is impressed with President Hemphill’s leadership and the direction he is taking the university.

“He has a real vision, and he’s acting on it,” said Scaggs, who also serves on the university’s Strategic Planning Task Force Brand Identity sub-group. “He’s making his vision a reality.”

As a new business owner and Radford University alumna, Scaggs realizes the important role the university can play in the local economy. She has already taken advantage of the university’s many helpful resources, including its students.

“My very first intern was a Radford University student,” she said. “He was eager to learn, well-equipped and hungry for the experience.”

This past December, Scaggs was able to hire her first employee – a Radford University graduate.

Larry and Donna Sams of Sams Brothers Inc., a general contracting company, said they believe the communication between the university and the surrounding communities has increased in the last year.

“We would love to see that communication continue to grow,” Larry Sams said.

Their company has hired several successful Radford University interns. They’ve also hosted a class for interior design students at which they taught various skills and allowed students to design and set up an entire wall.

“They make up about 40 to 50 percent of our business,” Brad Angell estimated.

Angell opened up the barbershop four years ago with his wife, a Radford native.

“We love getting to know the campus community,” Laura Angell said.

“A member of Radford’s ROTC invited me to his commissioning ceremony,” Brad Angell said. “We’ve formed some pretty special relationships with our Radford University customers.”