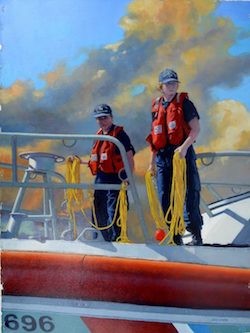 The COGAP is a unique collection that travels across the United States and the world to educate and inform the public about the services performed by Coast Guard members.

“It’s a huge honor to win the George Gray award, and the fact that I’ve won it four times is still astounding to me,” Smith said. “The first time I won, I was just dumbfounded. The fourth time was completely unexpected.”

Smith’s inspiration stems from both magazine and book illustrations during the 1950s and 60s and by the early work of Howard Pyle and N.C. Wyeth.

“Winning awards is fun, and it’s a good thing when it happens, but art tends to be subjective and often dependent on the interests of the judges,” Smith said. “We encourage our students to get involved in competitions, but not define themselves by the outcome, either good or bad.”

Graphic design students in the College of Visual and Performing Arts (CVPA) are required to enter various competitions, and Smith emphasizes that it’s a great opportunity and a good place to measure up the quality of your work with peers.

“Competent illustration is the baseline, so your work has to be better than that,” Smith said. “Illustrators live and die by their portfolio, so it’s incumbent on students who wish to work in the field that their work – their personal illustration work – be top notch.”

Even though Smith has no personal experience with the Coast Guard, he considers it a true honor to be associated with the COGAP and appreciates the visibility that it gives his work.

“As any artist will tell you, it’s always gratifying to see your work recognized in any venue, but especially a venue with the quality of work that the Coast Guard artists bring to the program,” Smith said.