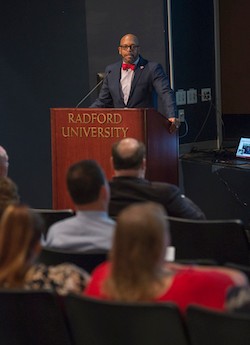 Administrative and professional (A/P) faculty joined the president at the first of the two forums, during which President Hemphill reviewed the 2016-17 academic year, previewed the 2017-18 academic year, addressed the strategic plan, enrollment, retention and took questions from the audience. Additionally, Vice-President of University Advancement Wendy Lowery addressed the audience members on the upcoming capital campaign.

Hemphill updated the A/P faculty on the status of the proposed handbook revisions, which is scheduled to be completed by the end of the fall semester.

“When I reflect upon 2016-17, without question, it was a year that of which we are proud,” Hemphill said. “When I started the year, I was thinking about Sept. 9 when we had 120 faculty, staff and students come together and engage in conversation about the university’s economic forecast and the university’s budget while looking at some of the key areas that we need to focus on moving forward: innovation, efficiencies, revenue generation and economic development. Seventeen recommendations came out of that day-long process.”

On Nov. 11, 2016, Hemphill hosted another milestone event – United as One Radford Family.

“We came together as faculty, staff and students as one united family,” he said. “We had a really important conversation. The event allowed us the opportunity to engage in respectful campus-wide dialogue about what it means to be a member of a community in a democratic society.”

Another highlight was Radford University hosting Highlander Pride April 27-29, a weekend that featured the Red and White Gala, a golf tournament, and the Highlander Half marathon and 8K.

Additionally, President Hemphill announced that Radford University will be hosting Virginia Gov. Terry McAuliffe and other state dignitaries for the announcement of an accelerated academic program and new delivery platform on Sept. 8. The new program will have a focus on cybersecurity in year one and geospatial intelligence and counseling with a focus on opiates in year two.

“I think that this will benefit the Commonwealth of Virginia as well as this university significantly,” Hemphill said. “Not only will we become a national leader in these fields, but we will be the first four-year public university in the Commonwealth to offer competency-based education.”

Hemphill also announced that on Aug. 28, Radford University will sign a guaranteed transfer partnership agreement with Northern Virginia Community College. The agreement will be the first of its kind in the Commonwealth of Virginia. As part of the agreement, students in the Northern Virginia Community College System who chose a pre-determined path will have guaranteed admission to Radford University with no wasted credits.

During the forums, President Hemphill addressed a variety of topics during the open questions period, including community college tuition and Radford’s agreements with community colleges; enrollment; retention; future construction and renovation projects; and the budget. President Hemphill also announced that he will be visiting every non-academic department during his second year.

Others in the audience, including members of the Staff Senate, have had President Hemphill’s message and actions resonate with them. 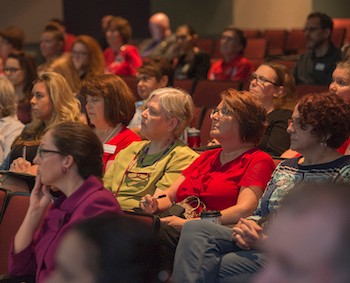 “President Hemphill always goes out of his way to include Classified Staff in every facet of the decision-making processes,” said Karen Montgomery, Staff Senate president. “Examples of this are when he talked about the Budget Planning Summit and the Strategic Planning Committee; asking the staff members that were on those committees to stand and be recognized. He has always been willing to listen to our concerns and find answers to our questions and make changes where he can.”

At the Classified Staff Forum, President Hemphill provided similar campus updates to a large audience inside the Bonnie Auditorium.

Division of Student Affairs Staff Senator Kimberly Dowdy, speaking on behalf of the entire Staff Senate, expressed her appreciation for President Hemphill’s “authentic and genuine interest in the community members who make up the Radford University family.”

“We have heard especially how important it is to our segment of the university population that he makes a concerted effort to ensure the staff has a voice in the process,” Dowdy said. “Not only does he listen, he gives weight to our perspective and treats us with equal compassion and respect.  His passion and commitment to progress are inspiring us to explore new initiatives and ask the tough questions that the Senate feels empowered to tackle moving forward.”