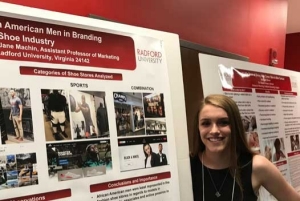 Courtney Ward presents her research at the Honors Academy Showcase.

Like spring flowers, hundreds of presentations popped up across campus the week of April 17 during Radford University's Student Engagement Forum (SEF).

The annual event, sponsored by the Office of Undergraduate Research, highlights the dynamic research of students from across the university's seven colleges. Students, along with faculty mentors, showcased their work in the form of dialogues, poster presentations, ePortfolios and workshops.

The Capstone Showcase, featuring the students from the Radford Honors Academy, started Radford’s annual four-day festival of learning and sharing.

“This is the apogee of a student’s experience,” said Associate Director of the Honors Academy Jason Davis. “I am proud of the diversity and scholastic abilities on display.”

“It all began with a conversation with my favorite professor about my favorite subject,” Reid said. “I am glad it is over and I feel like I took a huge step.”

Junior marketing major Courtney Ward also found validation for her career aspirations after completing her project, a survey of regional mall displays, staff and advertising to assess the representations of African-American men in athletic footwear advertising and branding.

“Most of the research I read was not focused as specifically as mine, so I believe I found an opportunity to extend both my research skills and my knowledge about a field in which I am interested,” Ward said.

At the Honors Capstone showcase, two presentations were displayed, but unmanned, as a result of a fatal car accident that claimed the life of Honors Academy student Bridgett Oliver two weeks earlier. Oliver’s poster presentation on neo-natal care, titled “A Little Dose of Being Held Close,” stood with her Honors Academy classmates as did that of Rachel Jones, who was injured in the same accident that occurred as they returned from the Southern Regional Honors Symposium.

The process and the products featured at the SEF impressed Director Joseph Wirgau.

“Our students learn, grow and create so much knowledge with their faculty mentors,” Wirgau said.

Just beginning her research career, is Morgyn Church, a freshman physics and mathematics major. Church presented her first-ever research poster at the Accelerated Research Opportunities session. ARO gives selected students the opportunity to be exposed to, prepare for and actively engage in research and scholarship early in their academic careers.

Church, worked with faculty from both the department of mathematics and statistics and physics to create a dynamic orbital model of the solar system.

“I had never coded before and it was awesome when I realized I knew what I was doing,” she said. “I was able to keep up with both math and physics classes as a freshman and it was fascinating to see how they relate and come together,” Church said. 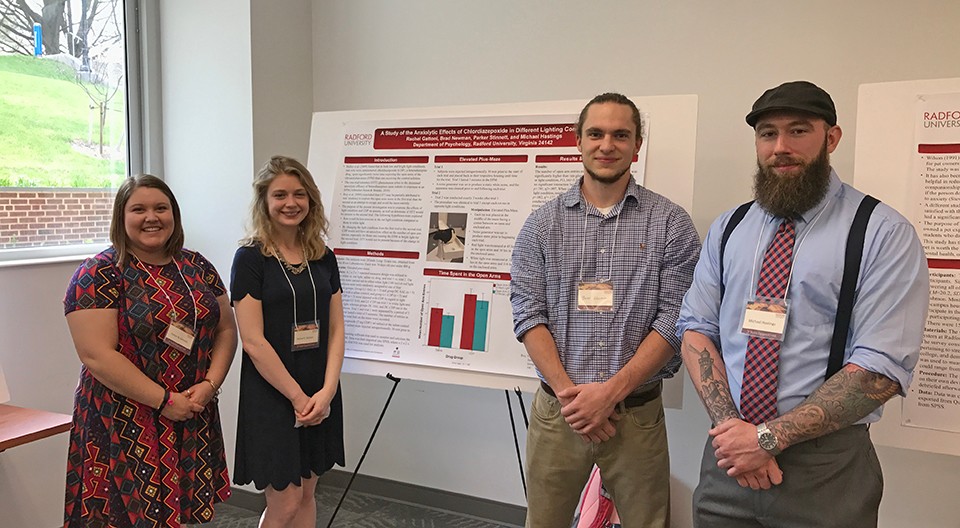 Nancy Artis '73, vice president and co-founder of Performance Associates, spoke to an audience inside the Center for the Sciences about career evolution.

At Performance Associates, she, along with husband, Pat, oversee the software engineering and storage technology firm in Pagosa Springs, Colorado.

"In five years, you will probably work in a job that did not exist today," Artis said. "Challenges will come your way, and you have to use the skills sets that you developed to tackle those adversities."

On April 19, students graduating with distinction from the Scholar-Citizen Initiative (SCI) showcased diverse ePortfolios that chronicled their accomplishments with the program.

Ansel, a health education and health promotion major, said SCI had opened up opportunities that she never thought possible.

"SCI has changed my life in more ways than one," she said.

Ansel reflected on her mission trip to Belize, her role in the Global Health Education Club and the many blankets and pillows she made for those in hospice care.

"Radford is where I developed my giving nature," she said. "I can't wait to graduate so I can use all the skills I've learned here.

"Professors have invested in me so much," she said. "They showed me I was a Scholar-Citizen before I knew I was one.

Carrasco, also a political science major, is the first woman in her family to graduate college, she told attendees. At Radford, she is responsible for reestablishing the university's only Latino sorority, Chi Upsilon Sigma. After graduating, she will serve in the Coast Guard.

"SCI has taught me to never leave a day without feeling proud of myself," she said.

The SEF also incorporated a Psychology Poster Session, at which students presented the results of semester-long research projects.

One of those projects required seniors Parker Stinnett, Rachel Gattoni and Brad Newman and graduate student Michael Hastings to work with rats.

“It gave me an opportunity to really get a hands-on experience before going into grad school,” Newman said. “We got to really experiment and collect all the data and write the entire report.”

Their study involved testing rats’ responses in an elevated plus-maze in various lighting conditions after being injected with chlordiazepoxide. During the project, Gattoni learned about the research process, particularly how to handle rats in a research environment.

“We learned that you have to make them dizzy to be still, so we’d have to gently spin the rats to throw off their equilibrium,” she said.

Another research project undertaken by students was by seniors Elizabeth Click and Kayla Hall. Their study involved judging personality based on a photograph.

“We were expecting the attractive picture to get better personality ratings than the average photo based on different research that has shown the same pattern before,” Click said. “What ended up happening was that the first two photos got the same results and the third photograph got lower [ratings].”