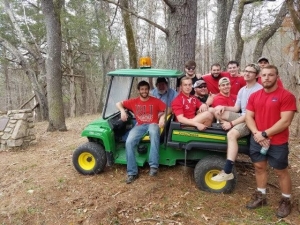 This semester, the 30-man-strong Radford University rugby team has been helping preserve a historic family cemetery at Selu Conservancy.

Radford University's rugby team is tough on the field.

They proudly wear black eyes, bloodied ears and other battle scars to prove it.

They are equally tough, though, in the woods.

Their calloused hands show they swing an axe as mightily as they fling opponents to the ground.

This semester, the 30-man-strong team has been helping preserve a historic family cemetery at Selu Conservancy, a 380-acre property owned and maintained by Radford University. During two separate trips, the team cleared the path to the cemetery of fallen trees and other debris that accumulated over the fall and winter months. They also lined the perimeter of the sacred site with rocks to make it more visible to visitors.

The men's rugby team is a recognized club sport at Radford University. Clubs participate in collegiate leagues similar to those of varsity teams. Since its inception, Radford's Sports Club Council has helped develop 22 sport clubs with more than 450-plus participants.

"I am so proud of these young men," Clark said. "They are a hard-working and determined bunch who feels strongly about giving back to the Radford community. They are shining examples of the students that Radford University produces – loyal, dedicated and service-oriented. We are honored to partner with Selu to help preserve the history of the Peterson family." 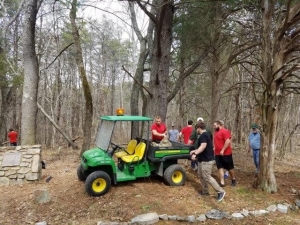 Team members line the perimeter of the Peterson family cemetery at Selu with large rocks they collected along the path to the site.

Generations of Petersons once lived at present-day Selu, explained Jeff Armistead, Radford University's assistant director of university services operations. Family members were buried in a cemetery not far from the original home place.

In the mid-1990s, when Radford University was constructing the retreat center at Selu, Dave Moore, former vice president for Academic Affairs, met and befriended John Peterson Sr., who grew up on the property in the early 1900s.

Peterson earned a degree from Virginia Tech and later moved to North Carolina where he had a successful career as the CEO of Burlington Industries. For years, he would travel back to Selu for an annual picnic. During those trips, he ritually walked the mile-plus-long path to the old home place and cemetery.

No headstones were ever placed in the cemetery, so Peterson provided Armistead and Moore with the names of the family members who were buried there. As masons were finishing up the stone work around the new retreat center, Selu staff asked if they could also construct a monument honoring family members interred there as well as four pillars to mark the boundary of the cemetery.

"History has it that folks would plant a cedar tree on each corner of the family cemetery," Armistead said. "These trees – actually Juniper- are still there."

Rugby team members followed Peterson's path back to the cemetery this spring. Along the way, they used axes and saws to clear brush, trees and prickly briar patches that blocked the way. They also collected large rocks to enclose the perimeter of the cemetery, connecting the four pillars.

Benjamin Hargett, or "Big Ben" to team members, said he enjoyed the outdoor labor and learning more about Selu, a Radford University destination he knew little about before the service project.

"We wanted to give back to the Radford community because they provide us with this great place to explore and to relax," Hargett said. "It's our job to keep it nice for others who visit here."

It's also important to preserve the Peterson family history and the team's resilient reputation, he said.

"Rugby and working at Selu both involved hard work, determination and teamwork," he said. "Without these attributes, neither of these would prosper."
Fletcher said many memories were made during those long days out in the woods.

"I enjoyed the walk to and from the cemetery…chatting with my teammates and just enjoying the beauty of Selu," Fletcher said. "Another great memory was presenting Dr. Clark with his very own Radford rugby jacket. He has been such a great supporter of the team."

John Peterson Sr. passed away in 2015, one month before his 100th birthday. Although he wasn't buried at the Peterson cemetery, his name was posthumously added to the monument per his family's request, Armistead said.

Armistead and Selu staff stay in touch with Peterson's son, John Peterson Jr. They send him photos and updates of the cemetery's progress.

Before his death, Peterson made a generous donation to the Radford University Foundation. Moore and Armistead promised to use the money to maintain the cemetery, Armistead said.

With the help of the Radford rugby team, they will keep that promise.

"I am sure John, Sr., is posthumously extremely proud," Armistead said.