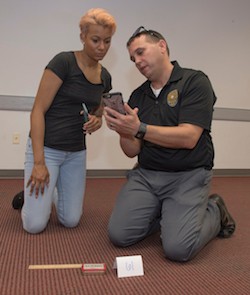 Ckareekeea Branch gets some pointers on how to photograph "evidence" from Radford University Police Lt. Samuel Shumate as she and her classmates work to "investigate" a mock crime scene in Heth Hall as part of Dr. Burke's Criminal Justice class.

Criminal justice students found themselves in a middle of a crime scene during a practical training exercise at Radford University.

When the Criminal Investigative Theory students arrived at the March 29 scene in Heth Hall, papers, mail, a handwritten note, giant stuffed rabbit and a “murdered” mannequin greeted them.

The fake scene had a heavy dose of reality when members of the media beat the students to the scene. Things got tense as the difficult reporters had to be removed so the students could secure the area.

“It’s something they will be doing in real life,” said Tod Burke, class instructor and professor of criminal justice. “I want them to be able to see what a crime scene is like. In class, we discussed crime scene protection and what they should be looking for and how to collect evidence.”

Professional first responders – including detectives in the Radford University Police Department (RUPD) volunteered their time to provide feedback to the students.

Radford University Police Lieutenant Sam Shumate told the students to “always make sure to use the same measuring scale and method every time. You seem more organized and it will result in fewer things that a defense attorney will bring up in court.” 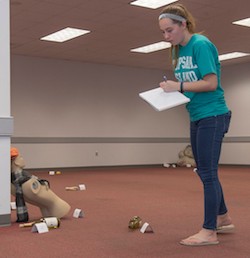 Carrie Tomlinson diagrams where each of the items of evidence were found as she and her classmates in Tod Burke's Criminal Justice class "investigate" a mock crime scene in Heth Hall.

With so many students and reporters going in and out of the classroom and handling the evidence, it is important to stay organized and have a clear chain of command.

To help speed up the one-hour exercise, senior Lauren Dawson documented the entry of people as quickly as possible, but said that, “If I get out of order or go too quickly, the whole chain of custody would be messed up.”

Senior Elena Linkous, the student chosen to be the police captain in the mock crime scene, knew that mistakes would happen during the crime scene practicum.

“We took everything one step at a time,” she said. “We went back and retraced any errors that occured. We also took a step back to breathe to get it done right.”

Burke told the students that “there is never a perfect crime scene” and that “even veteran officers make mistakes.” But he also stressed that he wanted them to learn from any mistakes so that a critical mistake isn’t made at an actual crime scene. The importance of proper procedures at a crime scene may make a difference between helping the prosecution to present evidence to aid in a guilty verdict or the exoneration of the innocent.

The ability to go back and correct a mistake during a simulation is why Linkous chose Radford for her criminal justice education.

“It allows us to get an idea of what is going on at a crime scene, whether it be for future reference if we are in the criminal justice field or going to do something else in the field,” she said. “It gives us a sense of all the different roles that are in play at a crime scene.”

Two RUPD detectives, including Shumate, offered advice and praise following the exercise, saying that the students were the most organized of all the classes he had seen and that the initial photographers did a good job when taking the initial four corner pictures, which allows a crime scene to be recreated after-the-fact.

After the practicum, students remained unsure of who committed the crime, instead opting for the evidence to speak for itself in the coming weeks as they will present their findings to the class.