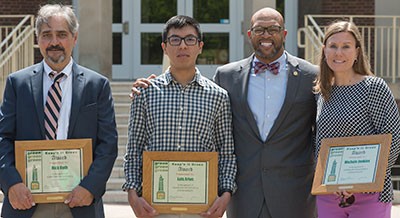 Radford University honored three individuals for their commitment to campus sustainability April 21 with the Keep’n It Green award.

The university’s Staff Senate sponsors the awards to recognize individuals who display leadership and dedication in promoting sustainability on campus. For the first time, an award was presented to a student, staff member and faculty member.

“My hope is that people may see the difference conservation can make for not only us, but for generations to come,” Arias said.

Michele Jenkins, associate director of Student Success and Retention, was named the staff winner, and Rick Roth, professor and chair of the Department of Geospatial Science, won the faculty award.

Staff Senate presented the first award in 2011. Criteria are based on one or more of the following: energy and water conservation, waste reduction/recycling, behavior change and/or awareness and economic impact.

Each recipient received a certificate framed with wood recycled from Norwood Hall. The frames were built by Tommy Cochran, a carpenter in Facilities Maintenance and Operations.

The Keep’n It Green award committee accepted online nominations throughout March, and “received a wonderful response from the campus community,” Nease said.

He, along with Radford University President Brian O. Hemphill, presented the awards during the university’s pre-Earth Day Celebration on Heth Lawn.

Nease also announced Madison Hall as winners of the Spring RecycleMania event, a friendly two-month recycling competition among the university’s residence halls. Its residents will received a zero-waste pizza party.

The campus Green Team and SGA hosted the celebration, which included games, information tables, an herb garden planting station in recycled materials and human-powered smoothies on a smoothie bike.

“Here at Radford, we learn a lot about sustainability and recycling that will help us in the future, and it’s important to think about your impact on the world because you do have an impact,” said senior Amanda Harvey, president of the campus Green Team.

Three College of Visual and Performing Arts ambassadors collaborated with the Makers living-learning community to design and build a fashion-themed recycling project. The students showcased their creation – based on the Marvel character Groot – during the festivities. The dress was made out of recycled or natural materials, including bark from a dying tree.

Radford University Recycling hosted a Shred-A-Thon in the afternoon at Heth Clock Plaza. The purpose of the event was to safely and securely shred and recycle unwanted documents.