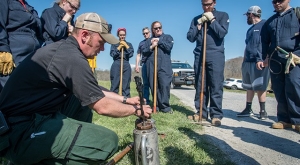 Fire Ecology students receive equipment training by Virginia Department of Forestry personnel prior to the prescribed burn at Selu Conservancy on April 11. - Photo by Andrew Ross

Class members participated in a prescribed burn on an 8-acre parcel of land at the Selu Conservancy. As giant flames shot up, students kept their cool to conduct a successful burn. Adrenaline pumping, they reflected on the spectacular event as the field smoldered before them.

"That was wild," they agreed.

Over the past decade, the Selu parcel has been actively managed by the use of prescribed fire. Controlled burns have taken place at three-year intervals. Powers and her students have been active participants in the last two successful burns conducted in 2011 and 2014.

The parcel originally was planted with native warm-season grasses. The goal was to encourage the return of native grassland species, such as bobwhite quail. This is just one of many ecological benefits to prescribed fires, Powers explained. Others include the minimization of natural fire threats, invasive plant species control and the immediate return of nutrients to the soil.

This spring, Radford University offered its first Fire Ecology (BIOL 481) course. The 12-member class prepared all semester for the April burn, including enrolling in Firefighter Training and Introduction to Wildland Fire Behavior courses offered through the Virginia Department of Forestry (VDOF).

"The Fire Ecology course allows students to work toward obtaining their Red Card certification and be able to fight wildfires for government agencies upon successful completion," Powers said. "This makes our students immediately marketable and even sought-after." 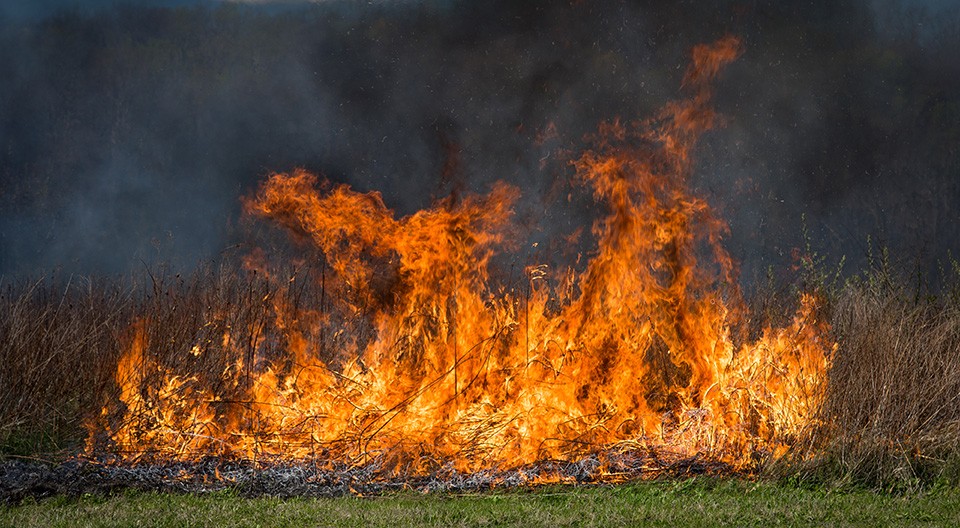 Weather conditions were perfect for the April 11 burn: light wind, less than 80 degree temperatures and about two to nine days since the last rain.

Personnel from VDOF and Radford University's Office of Emergency Preparedness and Environmental Health and Safety were on hand to assist with pick-up trucks that carried water tanks. Geology faculty Skip Watts and George "Paki" Stephenson captured the burn with drones that hovered above.

The group split into teams to tackle different phases of the burn.

Once ignited, the smell of smoke filled the air. Seconds later, flames emerged – slow at first, but then they literally "spread like wildfire." Several deer fled, and a turtle and vole were carried to safety.

As the fire raged, Powers and her students hurried to contain it. Flames jumped over the fire line a few times as the wind picked up, but water tanks quickly extinguished them.

"Everything that we talked about in class happened today - and we were prepared for it," Powers told students. "I'm very proud of all of you."

Senior Greg Porter, an environmental biology major, started contemplating his career as he talked with classmates after the burn.

"This class has opened up a lot of opportunities," Porter said.

He's considering a job in a state park or as a conversation resource officer. He might even head out west to fight wildfires.

"This has by far been the No. 1 best experience I've had at Radford University," he said. "It was awesome."