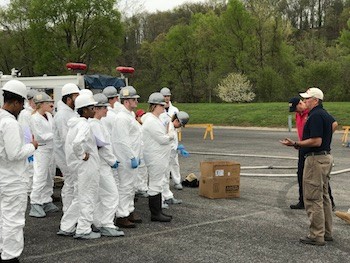 The fire – and subsequent investigation – took place on April 18 in Lot Z at Radford University as the final piece of the Fire and Arson Investigation class taught by adjunct instructor Todd Jones ’88 MS ’94. Jones, an investigator for the Virginia Farm Bureau, passed along skills used on the job to students, who used the skills to collect and handle evidence to identify the origin of the fire.

The burn cell was fully set up as a dorm room prior to the training exercise.

“It’s really unique,” senior Colby Matthews said about the opportunity. “That’s the best way to describe it. Not everyone gets to experience something like this hands-on before they get into the field. If you’re looking to get into fire investigations or law enforcement, along with other jobs, it’s great experience to have under your belt. You have an advantage over everybody else.” 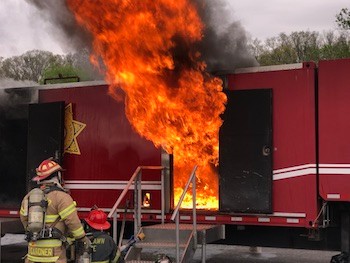 Members of the City of Radford Fire Department are on standby as the burn cell training exercise is underway.

The VDPF mobile burn trailer is an improvement over previous training methods. Instead of building an entire set or structure, the trailer, in addition to being environmentally friendly, only needs to have dry-wall and burn materials replaced to be reused.

“We also use the mobile burn trailer for training of fire marshals in the Commonwealth,” said Virginia State Fire Marshal Brian McGraw, who attended the burn. “Other agencies also use the trailer. Three weeks ago, the FBI used the trailer.”

The trailer’s next stop was Radford University, where five teams of students walked into the burn cell and assessed it, took pictures, made sketches, collected evidence and developed a theory.

“We were also looking for accelerants and to try and figure out the story behind the fire,” Matthews said. 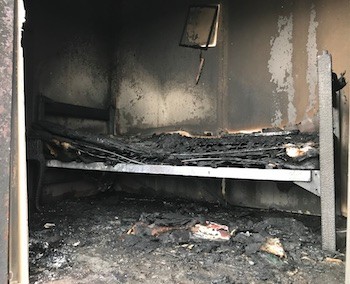 The charred remnants of the cell, which was set up as a dorm room prior to the burn.

When entering the ashen remains, senior Kyle Fernandez and his group immediately looked for clues.

“What I’ve noticed in there is that part of a sofa mattress in there that has been completely burned on the right, while there is still fabric from the outer layer on the left side. That leads me to believe that the fire started on the right side of the mattress. It’s things like that that stand out,” he said.

After searching for clues, Jones has the students develop a theory regarding the fire.

“Their job is to find out if it is an arson case or an accidental case,” Jones said. “All semester we’ve been learning about fire patterns, what to look for in a fire scene and how an investigator would approach a scene using scientific methodology.”