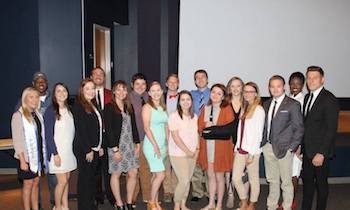 Instructor Kathleen Degnon (first row, fourth from left) is pictured with her students that developed and organized COMS Week.

The School of Communication (SOC) honored students during its annual awards ceremony.

The ceremony capped off Communication Week, a week dedicated to the profession of communication. Outstanding students were honored for their academic achievements during the ceremony.

“From the beginning of the program, Jodie wanted to take on one of the most difficult challenges, which is writing a thesis,” said John Brummette, associate professor and acting assocaite dean of the College of Graduate Research and Studies. “She tackled these challenges head-on and consistently succeeded.”

Stamm, the other graduate student of the year, applied to the University of Tennessee’s doctoral program and was awarded a full ride.

“He kept a laser focus on what to do to get into a doctoral program,” Brummette said.

“This group is very special to me,” Brummette said. “They’ve done an excellent job being role models to younger students.”

James Collier, an associate professor in the SOC, was honored during the ceremony for his nine years of service to Radford University and the school. Collier announced he was retiring in January.

“I know you’re going to continue to contribute to the field of communications,” said Scott Dunn, assistant professor in the SOC. “We’re going to miss you here. We look forward to seeing what the next chapter of your life brings.”

Leigh Anne Kelley, an instructor in the SOC, was also recognized during the ceremony.

“She went above and beyond in mentoring students about their careers and their lives,” Collier said. “She’s also an accomplished journalist.”

In the week leading up to the awards show, the SOC hosted numerous alumni and professionals in the field of communication.

In one of the events, members of the local media participated in the media ethics panel, which discussed pressing issues in the field of journalism. John Carlin, WSLS 10 anchor; Joe Dashiell, WDBJ7 senior reporter; Todd Jackson, The Roanoke Times New River Valley bureau chief; and Twange Kasoma, SOC assistant professor were on the panel.

The panel discussed news accuracy and trust, the Freedom of Information Act, ethical considerations during broadcasts and other timely issues in journalism.

In another event, Christina Beck, president of the National Communication Association and former COMS instructor at Radford, spoke about nostalgia and fandom – and why people are nostalgic in nature.

“We are at home in that past because that is where we came from,” Beck said. “You’re building your own nostalgia right now. You’re going to reconstruct things in your mind differently from what actually was.”