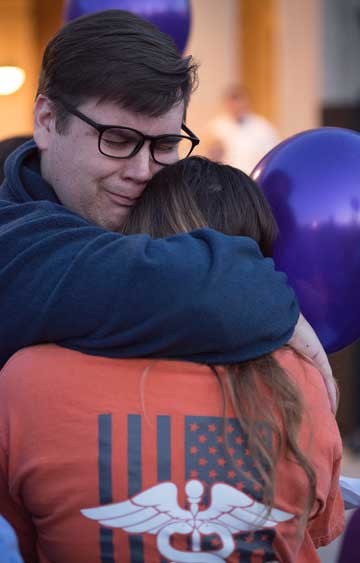 To celebrate Bridgett Oliver, more than 100 classmates from the School on Nursing and Honors Academy, gathered for a memorial vigil at Waldron Hall on April 2.

Oliver died as the result of an automobile accident late Friday. Bridgett was 21 and a senior honors nursing major. She was from New Castle and is survived by her parents William and Teresa.

Fellow honors nursing student Rachel Jones of Dinwiddie was seriously injured in the same accident and is hospitalized.

Christensen recalled Oliver’s capstone defense in which she confidently responded to challenges to her project on post-natal vomiting.

“She balanced expertise with empathy and was passionate and excited about making the world better, despite difficult circumstances,” Christensen said.

One classmate recounted his relief when she was assigned to his group for a project, saying, “When you were with her, you knew you were going to ace the project.”

Another nursing colleague reflected on Oliver’s work with a single mother who was going through the birth of her child alone.

“Bridget told me she felt so much joy in caring for that patient during the worst of times. What a message. I will take it with me every day in my nursing career.”

A candlelight vigil and balloon release into a clear sky dominated by a full moon capped the ceremony while a drum circle by faculty and students from the Music Therapy program accompanied the poignant gathering. 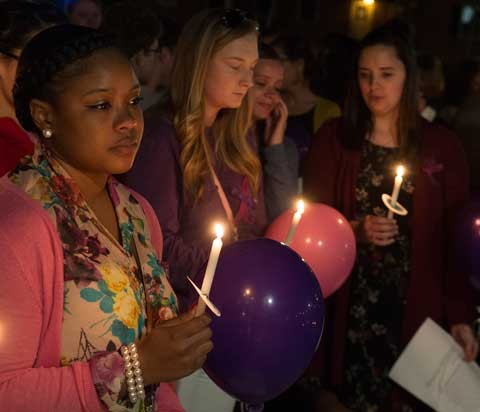 Fellow nursing and honors academy students reflect on the loss of one of their own, Bridgett Oliver.