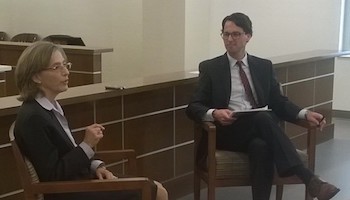 The Prelaw Society at Radford University held its first event of 2017 when retired Justice Cynthia Kinser visited campus on March 29.

“Her story allows students to get a better understanding of all the things you can do with a law degree,” said Luke William Hunt, assistant professor of criminal justice. “It's not just working in a law firm. For example, I went to law school and then became a FBI Agent.”

The standing-room only event featured Hunt interviewing Kinser. Hunt started the interview by asking Kinser whether her experience as a magistrate judge, who has the authority to authorize a police officer to enter someone’s home via a search warrant, gives her insight into the recent tension between law enforcement officers and the communities they serve.

“That’s a lot of authority,” she said. “There were many times that I read the affidavits for the search warrants and not think there was enough probable cause. They’d have to bring back more information - I had to be convinced that there was probable cause.

“I think it is important for judicial officers who issue search and arrest warrants to be careful and take their jobs seriously,” Kinser continued. “I think that police officers’ authority to arrest on the spot if there is a felony committed in their presence requires a lot of responsibility. I think it is important that police officers respect that and peoples’ individual rights and not overstep bounds.”

Kinser said that everyone needs to understand the criminal justice system and that a lack of understanding might be a cause of the tension.

When deciding cases, justices took turns speaking in a conference in the afternoon, with the justice assigned to write the opinion speaking last.

“If you were voting in the minority and felt like you could just not write the case the way the majority of justices wanted in terms of the result, then during the week you’d swap [writing responsibilities].”

As a justice on the Supreme Court of Virginia, Kinser wrote the majority opinion in “Atkins v. Virginia”— a capital murder case that ultimately made it to the U.S. Supreme Court for review on Eighth Amendment grounds.

“We looked at the type of crime and how egregious it was,” Kinser said. “There was an existing U.S. Supreme Court case, only 11 or 12 years old, where they had [ruled in a similar manner]. That’s cited in the opinion I wrote, but we knew it was heading to the U.S. Supreme Court. In front of the U.S. Supreme Court, he made an Eighth Amendment argument, not a proportionality argument like he made to us.”

Near the end of the interview, a student in the audience asked Kinser what she believed was the biggest threat to justice in society.

The Prelaw Society at Radford University will host similar events in the future, with the next event planned the week Sept. 17, 2017.