Summer in the Park 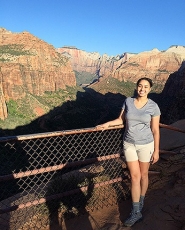 Seana Wilson took on a difficult, but fun, challenge this summer.

The Radford University Honors Academy student journeyed to Utah to spend six days hiking and working on service projects as part of the Partners in the Parks program.

She had never been camping or backpacking, and she had never traveled alone so far away from her Portsmouth home.

“It was a chance for me to learn a lot about being out in nature and about myself,” Wilson said.

Partners in the Parks is an outdoor experiential learning program coordinated by the National Collegiate Honors Council. The program offers projects for college honors student and faculty to work on at national parks across the United States.

Seminars, which are led by college and university faculty and park personnel, include historical, scientific, cultural and other areas unique to a given park. The program aims to bring together honors students to various national parks to explore connections among people, nature and sustainability.

For Wilson, the program started with hiking and backpacking 30 miles through Utah’s Zion National Park. Along the trail, she and eight other participants and their guides completed a service project in which they helped park rangers calculate the number of people in the park at particular places and times. The group later made its way to Cedar Breaks National Monument.

The program included a number of team-building activities and also solitude time, which Wilson said she often used to reflect “about how at one point those lands weren’t protected and how we have to do everything we can to keep the parks here as long as we can so everyone can get a chance to see them.”

Honors Academy Director Niels Christensen encouraged Wilson, a Recreation, Parks and Tourism major, to apply for the program, and she did because “I thought it was the best way for me to immerse myself in my major,” the sophomore said. Plus, she saw it as a way to build upon her career aspirations.

“I would love to one day be director of a local or state parks and recreation department, to run my own summer camp and become a park ranger for a national park,” Wilson said. This program was meaningful toward these aspirations because it gave me an in-depth look into a national park and how no matter how small the job, it benefited the park.”

Partners in Parks also showed Wilson ways, she said, to protect the nation’s parks and “create parks for people who don't have them. Because whether you are 6 or 60 years old, you will always have that curiosity to get out and explore and be playful.”

“That's three million people who care and are interested enough to spend vacations and free time in a national park getting exercise and seeing beautiful rock formations. Seeing numbers like that is super encouraging to me because I know people care about and love the national parks just as much as I do.”

Given that the program was “the hardest thing I’ve ever done,” Wilson said she would gladly remove herself from her comfort zone and do the trip all over again.

“I threw myself in southwest Utah over 2,000 miles away for six days with barely any cell phone service and 10 other people I've never met before and zero knowledge about anything I was about to do,” Wilson said. “It was the best thing I've ever done for myself!”