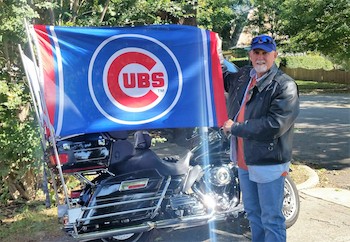 Professor Jim Borling standing next to his motorcycle with flying the Cubs flag.

Professor Jim Borling remembers running home from school to catch the tail end of a baseball game. Not just any team, though. His Cubbies only played day games at the time.

Borling grew up in Chicago and almost nothing gets close to his love of the Cubs – except for his love of music therapy and Radford University.

Borling’s love of the Cubs is something that most of his students discovered. After all, in a small program, one-on-one interactions are commonplace. These opportunities present outstanding opportunities for students to learn about professors’ craft.

Radford University is the only public school in the Commonwealth with a music therapy program.

“The academic rigor of the program is intense here at Radford,” Borling said. “To become an effective music therapist, you have to go through a development process yourself, in addition to the academic rigor and being challenged musically.”

At the end of their time in the program, students are required to have a clinical internship that lasts six months.

These internships can be done anywhere in the country, Borling said.

“The program is very clinically demanding,” he said. “You can’t slide or fake your way through it. We’re able to give one-on-one attention to our students to help them with any aspect of their education.”

Experience in the field is something that the professors in the program offer their students.

“We’re all active,” Borling said. “I have a private practice in Roanoke. My specialties are substance abuse and trauma and I work with clients on a regular basis. I’m able to discuss what the field is really like with our students."

Borling knows that with how hard and challenging music therapy is at Radford, that you have to have some light-hearted moments in class. It was in these moments that Borling spoke about the Chicago Cubs.

“This is my 34th year at Radford,” Borling said. “All kinds of students are emailing me because the know what a crazy fan I am. I’d joke with them that if they didn’t know the starting lineup from 1969, they’d never pass the class. It was all good fun.”

After third baseman Kris Bryant – who was grinning from ear-to-ear – threw the final out to first baseman Anthony Rizzo, he got to type and say a phrase that he never thought possible: The Cubs won the World Series.

And the reaction from the former students was amazing.

“Everything came running back when the Cubs won,” Borling said. “It’s so much bigger than the game for Cubs fans.”