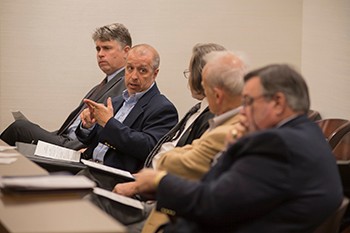 The panel of experts hearing the Kennedy presentations.

Radford University students filled the new courtroom inside the College of Humanities and Behavioral Sciences building on Dec. 6 to present their findings on controversial aspects of the Kennedy assassination.

The students presented to a panel of experts, comprised of Bruce Brown, mayor of Radford City; Thomas Goodale, who worked with Ted Sorenson as an aide and liaison to President Kennedy; Emil Moldovan, a retired investigation lieutenant with the Los Angeles County Medical Examiner’s Office and former adjunct instructor in criminal justice at Radford University; Chris Rehak, Commonwealth’s Attorney for the City of Radford; and Don Goodman, Chief of Police for the City of Radford.

Junior Devon Cahill addresses the panel regarding the timeline of the crime scene investigation of the Texas Schoolbook Depository.

Junior criminal justice major Devon Cahill thought that the project – and the course – taught her the importance of thorough investigative research.

“This class taught me to look at things in detail - these can be things that you’ve already studied or things that have already happened,” Cahill said. “This whole class was based around a case that happened years ago – a case that has been studied by millions of people and tons of professionals. Yet, you still find things that they didn’t see or people didn’t notice. I think it really shows that you need to look at all the details and keep an open mind when researching.”

In the analysis of Oswald’s psychological profile, it was found that he would have been competent to stand trial had Oswald not been murdered. 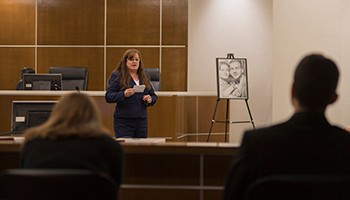 Debbie Robinson presents the conclusion to the panel of experts.

“We believe that although Oswald may have developed certain mental disorders as a result of his unstable upbringing, these disorders did not render him mentally unstable,” said student Debbie Robinson. “It is our opinion that Oswald was mentally stable at the time of the shooting. We found testimony that Oswald believed that he was destined to go down in history, one way or another. We believe that Oswald was very competent to stand trial for the assassination of President John F. Kennedy.”

Senior political science major Brianna Guest, a member of the group that analyzed Oswald’s psychological profile, learned a lot about his mindset.

“We originally thought he was crazy,” Guest said. “You certainly found a more personal side of him, because people take the personal emotions out – we got information on his family, his friends – it put his emotions back into his life. It was fascinating to learn more about his life and what led up to the assassination.”

Another controversy was law enforcement’s handling of shutting down the Texas Schoolbook Depository, the location from which Oswald shot President Kennedy. Radford University students pored over officer’s reports regarding the building.

“If procedure had been followed, history would be different today,” said student Grant Scott. “We may know if there was more than one person involved in the shooting if Lee Harvey Oswald had been detained immediately. There would be a better understanding of what went on inside the building. We feel that someone could have been convicted if the police had followed procedure by detaining people in the Schoolbook Depository as well as locking it down.” 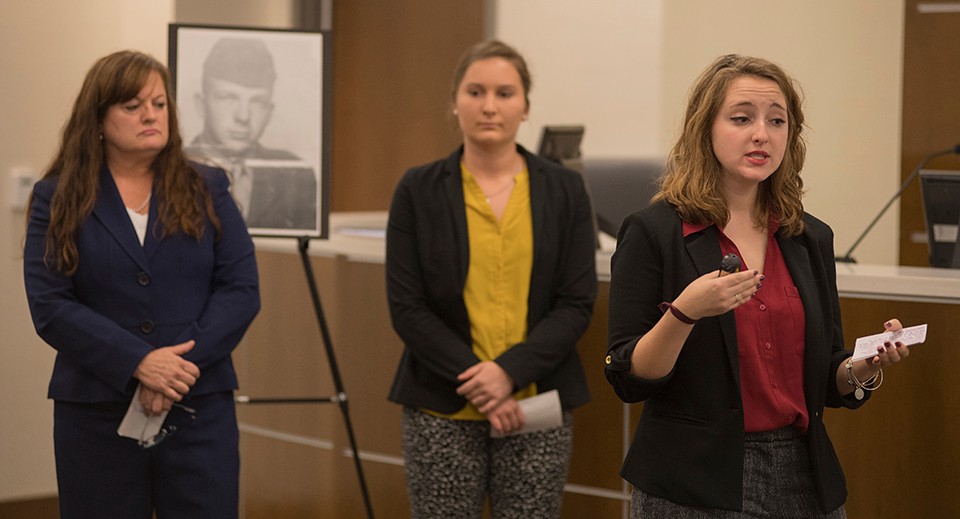 Goodman, who also served with the Blacksburg Police Department for 23 years, brought up the difficulties of police strategy at the time.

“Police tactics were remarkably different in 1963 than what they are now - to the point that if you probably had an active shooter in a building, the police would form up outside and then go in the building,” Goodman said. “It just brings up the question on why Officer Baker ran immediately into the building. Their communication capability was limited – they had no portable radio capability. They only had radios in the squad cars.”

“They were just going by gut feeling after the shooting,” Cahill said. “They had no communication with any other officers.”

The third group analyzed Marina Oswald. The group arrived at the conclusion that she wasn’t interrogated adequately after careful analysis of her testimonies, police reports and the testimonies of acquaintances.

“Those that knew her weren’t pushed enough and she wasn’t pushed enough,” said student Colby Mathews. “However, we believe that there is not enough evidence to support that Marina had anything to do with the Kennedy assassination or that she had any knowledge of it.”

The final group considered the Warren Commission, which is the unofficial name given to the President’s Commission on the investigation of the Assassination of President Kennedy. The students found that the Commission had serious shortcomings. 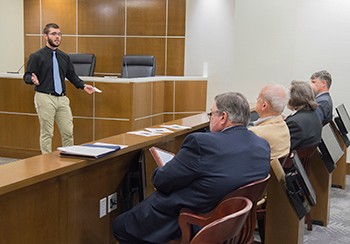 Grant Scott presents the conclusion of the Texas Schoolbook Depository to the panel.

Goodman agreed, saying that “the lack of interviews of CIA officials in a case like this speaks loudly.”

The presentations were held in the new courtroom, a place that Owen said “elevated the level of professionalism for everyone involved” and was “reflective of the seriousness and the importance of the topic.”

The students were in the courtroom during class prior to the presentations.

“We were able to do a rehearsal beforehand, so the students were able to get a feel for the professional environment in which they would be presenting,” Burke said.

The environment allowed the students to get professional experience presenting to a group of distinguished individuals.

For more information on Criminal Justice at Radford University, visit its website.