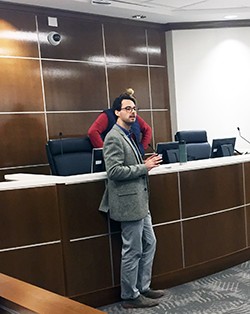 Students in Assistant Professor Luke William Hunt’s Criminal Law and Evidence course practiced the use of the insanity defense in a mock trial.

To learn about the insanity defense, Hunt’s class took advantage of the courtroom located within the new College of Humanities and Behavioral Sciences building at Radford University.  Students evaluated the psyche of the character Emily Grierson in William Faulkner’s short story “A Rose for Emily” through a mock trial.

Radford University students had the opportunity to decide the matter by putting Grierson’s character on trial and evaluating the legal standard for insanity.  The mock trial was conducted in conjunction with writing a court brief.

The brief prepared students for their roles in the mock trial and gave them the opportunity to argue either for or against Grierson’s criminal culpability.

Each of the students selected a particular character or role to play during the mock trial.  While the prosecution argued that Grierson failed to meet the standard for insanity, the defense team argued that she satisfied each of the elements of the excuse.

Hunt said that one of the primary goals of the activity was to introduce students to a professional court room setting.

“The excuse of insanity can be tricky, and it’s much easier to bring it to life through assignments like court briefs and mock trials,” he said.

Hunt’s class used the Model Penal Code as the legal standard because the insanity defense may vary from jurisdiction to jurisdiction.

“The Model Penal Code has been quite influential in criminal law and it is routinely taught in law schools across the country,” Hunt said.  “The basic idea is that a person is not responsible for criminal conduct when it results from a mental disease for which one lacks the capacity to appreciate either the wrongfulness of conduct or conform conduct to the law.”