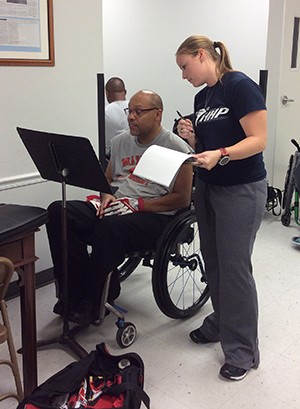 Wheelchair sports have become a meaningful rehabilitation option internationally, and Radford University students are helping to make these sports safer for athletes.

At the forefront of making this happen are a handful of undergraduate students with career aspirations in physical and occupational therapy, athletic training and sports medicine.

In October, Barfield and Angela Mickle, director of HHP’s athletic training program, took students to Baltimore and Washington, D.C., on separate trips to examine the effect of fatigue on baseline concussion scores.

In a gymnasium where the athletes practiced and competed in full-contact rugby and basketball games, Barfield and Mickle put the players through a series of sprints, increasing their fatigue levels.

The students then administered concussion assessments to the athletes. They used the King-Devick test, which can be administered on a tablet and takes only a few minutes.

“It’s essentially language processing, and when you have concussion, it alters the time in which you can recall or read or articulate that information,” Barfield explained. “The test information on the screen becomes more difficult to read.”

Through the testing, the group learned that athletes tend to achieve better King-Devick scores when they are fatigued. “The nervous system seems to be functioning more efficiently,” Barfield said. “It has a challenge and it’s forced to do some work.”

This is important because athletes tend to be at least somewhat fatigued from competition when they are most susceptible to concussion.

Through the testing, Barfield said the group hopes to establish a baseline score for wheelchair athletes. He points out that while such research has been done for able-bodied athletes, no studies have been conducted for wheelchair sports participants.

“It’s important to establish baseline scores, but it’s equally important to determine if we need to adjust and, if so, by how much based on fatigue,” Barfield explained.

“I want to have the students interview the athletes and ask what they want from an athletic trainer who has never before worked with a wheelchair athlete,” Mickle said. “I want my students to ask: What is it you want the athletic trainers to know about you, and what should they be aware of? What can they learn from you?” 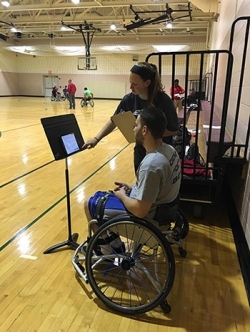 Brittany Evans took on the research challenge because she “wanted to learn a different aspect of the sports medicine field,” she said. “It was a great opportunity to see how research is conducted with these specific athletes and the methods behind the research.”

Evans, a senior from Suffolk, is planning a career path involving working with individuals with disabilities, she said.

Barfield and Mickle said the research opportunities provide their students with hands-on work with populations with whom they may someday work.

“It’s good exposure for our students because they want to move on to programs in physical therapy or occupational therapy,” Barfield said. “For them to be able to participate in this research gives them more exposure to the fields they’re interested in.”

Rachel Clarkson is deciding between two career paths. She wants to work either as an athletic trainer at the college level or “go into the military as an officer to work in the medical field,” she said.

“Either way, what I learned while on this research trip will be invaluable to whatever position I fill at a college or in the military,” said the junior athletic training major from Chesapeake. “Throughout my time at Radford, any experience I get will be beneficial to my short and long-term goals.

In the short term, students are planning to present their findings at national, state and regional research forums, Mickle said.

More studies are planned. In the spring, Barfield and Mickle, at the urging of the teams they worked with in Washington, D.C. and Baltimore, plan to conduct more research at regional and national tournaments across the eastern United States.

It is important work for the Radford University students and the athletes, the faculty researchers said.

“Many of these sports do not have concussion protocols, and this is a first step in starting that process. That’s one reason I’m so proud of the project,” Barfield said. “It has meaningful implications.

“We think about professional sports as having these protocols. However, there isn’t nearly enough money in wheelchair sports and therefore far fewer medical personnel assisting with the long-term health of athletes. This is great work our students are doing.”