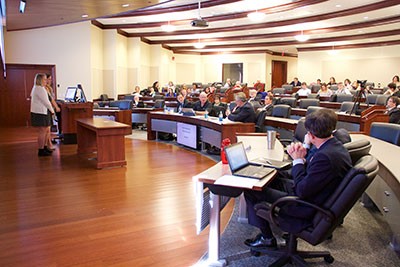 Paul Toomey has a terrific idea for an app, an idea that may save lives.

It’s an “anti-texting driving app,” he said, that will give users points and rewards for not texting while driving. Those points can be redeemed for discounts at retailers.

“The idea came when I was reading an article online about huge problems in society that humans usually ignore,” such as texting while driving, said Toomey, a Radford University freshman marketing major from Gainesville.

He came up with the idea for the app, called Your Choice, more than a year ago and entered it in DECA state competition, and won. His app placed in the top 10 of the organization’s national contest.

It seemed only natural that he work with a team of fellow Radford University students – they called their team Fat Apple – and enter the app idea in the College of Business and Economics/BB&T Business Innovation Contest.

The contest, now in its second year, is a semester-long project designed by COBE faculty to spark creative and innovative thinking in the university student community.

To enter, teams submitted a video – it could be no longer than six minutes – that clearly stated an opportunity or problem and explained how their product or service could help. Teams also submitted a one-page budget showing their business could be launched with $1,000 or less.

Ninety teams, which included 410 students, entered this year’s competition, doubling participation numbers from last year’s inaugural event. The teams pitched their ideas first to a group of judges made up of 10 COBE faculty members. Those who survived went on to a second round of judging from a group of 10 entrepreneurs.

From there, 13 teams advanced to the final round, a live event held Dec. 10 in COBE’s Kyle Hall.

“The last week was a real test because they had finals coming up and they found out only a week before the live event that they were finalists,” said Gary Schirr, who organized the event along with fellow Marketing Associate Professor Maneesh Thakkar.

A COBE faculty member, a venture capitalist, two entrepreneurs and two bankers judged the final round.

“Being part of this competition was truly a learning and remarkable experience,” said freshman marketing major Luisa Cutting, a member of the Fat Apple team. “Although it did not come easy, there were countless stressful, hard working nights my group and I put in toward this business idea. In the end it was all worth it.”

Worth it, partly, because Fat Apple won Best Overall, the contests’ top prize. And, being made up of three freshmen and a sophomore, they also took the prize for Best Non-upper Classman team. The team won $1,000 with the top prize and $400 for the Best No-upper Classman award.

“It was pretty surprising when we won the entire competition,” Toomey said. “I knew we had a good shot at winning the undergrad award, but I was very surprised to beat every grade for first place. It was a very humbling experience.”

Toomey said he and the team hope to use the competition winnings to launch the app to the public.

“Their idea for the app was to make it a positive choice for consumers,” Schirr said. “The judges were clearly impressed.”

The contest had seven categories. The other winners were:

“The student presentations in the final round were very exciting—energy and creativity were very evident, and the panel of judges added so much to the competition with their probing questions,” said COBE Dean George Low.

Cutting said she felt “blessed to be a part of this adventure with my group. It was an experience I will never forget.”

Assistant Marketing Professor Jane Machin requires students in her Marketing 101 course to work on a project-based, real-world problem or with a real-world client, she said, and it made “made sense” for them to submit work they were already doing for the class into the contest.

“The competition format gels nicely with the flow of my class – uncovering a problem, researching a problem, ideating solutions and testing and improving those solutions,” Machin said.

Five teams, including Fat Apple, from Machin’s class, which is open to freshmen only, were among the 13 teams that made it to the final live judging competition.

“I believe exposing freshmen to the skills required for successful innovation is particularly important, Machin said. “For example, participating in the competition helped them to overcome their fear of failure and also to see the level of quality that is expected at college.”

For the finalists, even those that did not win, Machin said “presenting and answering tough questions from a panel of seasoned investors also helped to build their confidence. Ultimately those teams will have something to put on their resume that clearly differentiates them in the job market.”

Quinton Doe’s team created the idea for the app, Helping Hands, which was the competition’s runner up and also winner of the Best Social or Nonprofit award. Their app centered on helping people find community service opportunities.

Doe, a marketing major who graduated Dec. 17, described the contest as “quite the experience.”

“I don't think that reality had set in about this being a legitimate competition until the judging rounds,” said Doe, of Fairfax. “We tweaked the app and our ideas a lot throughout the semester, but that last week, once the finalists were announced, we locked ourselves in a room in Young Hall and didn't leave until we agreed on every aspect of the app and presentation. I think we had a blast doing it.”