Instead of running away over Thanksgiving break, Radford student takes to runway 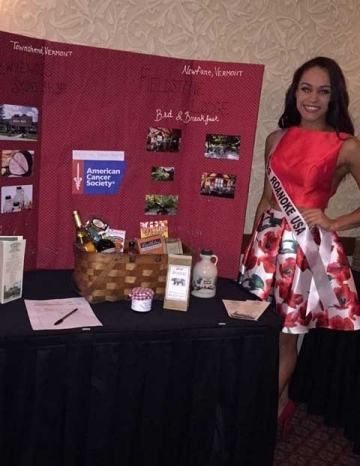 During her break, Alexis Drury, a junior nursing and psychology major from Roanoke, competed in the 2016 Miss Virginia pageant in Blacksburg.

For many students, the Thanksgiving Break was a respite from the rigors of academic competition.

During her break, Alexis Drury, a junior nursing and psychology major from Roanoke, competed in a different forum, – the 2016 Miss Virginia pageant in Blacksburg.

The competition was a welcome way to gather with her family and break away from a nursing student’s challenging schedule.

“I was able to make more friends and share interests with other contestants in school.  They are juggling things just like I do,” said Drury, who didn’t compete as a juggler, but could, given her work and school schedule these days.

Twice a week, Drury does eight-hour clinicals – one on the cardiology unit at Roanoke Memorial and one in the labor and delivery room at Radford’s New River Valley Medical Center.  She has classes three times a week at the Roanoke Higher Education Center and fills her spare time as server at Red Lobster.

“I am an independent student, putting myself through school,”  Drury said.  ‘The time management skills I learned last year in the nursing program help me keep things in order. So far I am fulfilling my dream and haven’t overslept once.”

For three days in Blacksburg, Drury’s quest for the Miss Virginia crown and scholarship money was boosted by a family reunion from across Virginia that included her mother, grandmother, sister, boyfriend, best friend and aunt and uncle.

“My goal was to make the top 12 and advance to Saturday,” Drury said. “I was kind of zoned out when they called my name and another contestant had to bring me back.”

Alas, she didn’t win the ultimate prize, Drury, the reigning Miss Roanoke, was satisfied with the outcome, though.

“It was a great experience,” Drury said. “I enjoyed the competition and was able to help others, as well.”

As part of the competition, Drury collected items and created a gift basket for the pageant-related silent auction that netted almost $14,000 for charity.