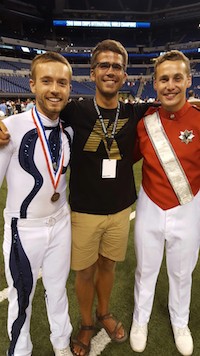 Senior Sean Brazel, junior Michael Strange, senior Cary Anderson and freshman Elijah Zaecki represented Radford in the DCI. The students performed in front of a combined 150,000 spectators over the course of the competition.

Brazel marched tenor drums with the Bluecoats, from Canton, Ohio, who won their first DCI championship. This was Brazel’s second year with the group, who auditioned and beat out 60 people for one of two open slots with the group.

Strange played xylophone with the Santa Clara Vanguard, out of California. Strange is also in his third year with the group, which won the Fred Sanford High Percussion Award – handed out to the group with the highest percussion score in the DCI. This was his fourth year in the DCI.

Anderson started performing in the DCI in 2012, where he spent three years competing in the event. Anderson spent his second consecutive summer as a teacher for the Boston Crusaders, where he had previously marched snare drum for three years.  The Crusaders were a finalist in the DCI championships.