New River Valley alumni representing seven decades of graduates gathered at Sinkland Farms in Christiansburg to hear Radford University’s seventh president Dr. Brian O. Hemphill discuss his initiatives to transform Radford University into an innovative, premier university in the Commonwealth of Virginia and beyond with a keen focus on teaching, research and service.

Susan Sink ’74, M.S. ‘78, owner of Sinkland Farms and host of the event, said that she was very glad to hear President Hemphill talk about the importance of philanthropic giving to the future of Radford University. “I work in fundraising. First and foremost, President Hemphill must acknowledge that fundraising is critical in advancing the university. I could see smiles and nods in the crowd when he mentioned ‘time, talent and treasure,’” said Sink.

Kristyn Cabler ’07, M.S. ’14 received her undergraduate degree in elementary education and her graduate degree in literacy and is a fourth grade teacher at Christiansburg Elementary School in the Montgomery County School District. She is a proud alumna and regularly shares stories of her Radford University experiences with her students. She is excited about President Hemphill’s vision for Radford University.

“He has a really clear, positive vision for where he wants Radford to go. He has already tried to connect with so many people through these events. That will make a difference as he moves forward toward his vision,” said Kristyn. 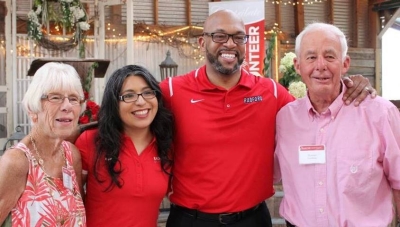 James Cabler ’06, an economics graduate who now works for Freedom First Credit Union, said he was pleased to hear President Hemphill’s emphasis on creating community partnerships. “It’s nice to hear leaders say they want to work with the business community. He gets it and that’s great,” said James.

Anthony Smith ’98, Vice President for Service Contracting of Virginia and member of the Radford University Athletic Foundation Board, said his company has hired alumni and reached out to marketing classes to conduct marketing projects. “What peaked my interest is his ideas for community involvement – reaching out to businesses and integrating the business community into the university experience,” said Smith.

After President Hemphill’s address to the alumni and his emphasis on the important role alumni play in Radford University’s future and the success of its students, he took questions from the audience. Nursing alumnus Laurie Buchwald ’85 was one of the first to raise her hand. She said that she didn’t have a question, but a statement. “Put me to work,” she said, “I’m ready.”

President Hemphill has traveled across the Commonwealth in July and August to meet alumni in Hampton Roads, Northern Virginia, Richmond, Roanoke and the New River Valley. On August 17, he will discuss his priorities for the university’s future with alumni in Abingdon at the Southwest Virginia Higher Education Center. He will continue his alumni tour in September with stops in Raleigh and Charlotte, North Carolina and Atlanta, Georgia.