Representatives from more than 140 colleges and universities from around the world attended the event, sponsored by Quinnipiac University. There were four categories in the undergraduate competition.

"We competed in the value category because we have a small to mid-cap value fund that the students manage for the university," said Steve Beach, professor of finance and SMIPO faculty advisor. "In competition with other funds that are categorized as value, we had the best risk adjusted performance."

Members of SMIPO, a student organization which manages funds for Radford University Foundation's endowment, submitted their annual results, which were a 3 percent gain versus a -2 percent gain from the S&P 500, said SMIPO President Nick Ramos.

"We've worked so hard and learned so much in the process, and to know that what we are doing is successful is truly a magnificent feeling," said Kelci Simonsen, an accounting and finance major from Richmond. "SMIPO left the Quinnipiac GAME Forum with our heads held high, and will be continuing to work hard to compete and represent Radford University in the future."

The three-day event was more than a contest. The first two days offered students and faculty an opportunity to hear from dozens of keynote speakers and participate in panel discussions and workshops.

The forum was designed to bring together an international group of current and future leaders from the financial industry to explore important developments, challenges and opportunities facing investment professionals within our global financial markets.

"It was a wonderful moment when it was announced that Radford University’s SMIPO was the best performing fund in the value category for the undergraduate division," Kaushik said. "We spoke to David Sauer, director and program chair of the event. He was very appreciative of SMIPO’s performance." 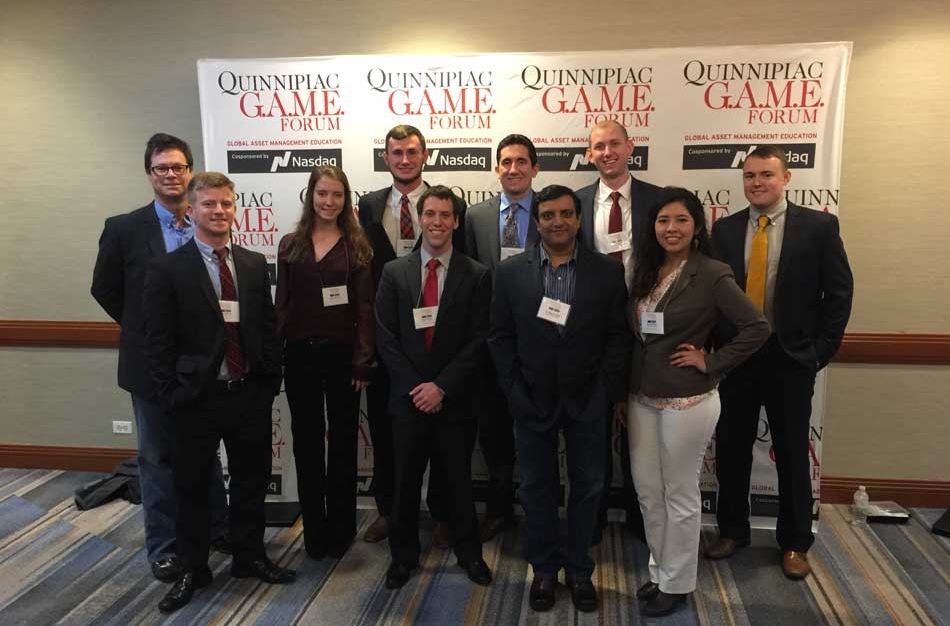 SMIPO provides College of Business and Economics (COBE) students an opportunity to gain practical experience in the management and decision-making processes of a corporate structured organization by participating in hands-on management of the funds.

The organization was founded in 2002 by Beach and Professor of Finance Clarence C. Rose for the primary purpose of providing RU students with the opportunity to gain real-world investment and portfolio management experience.

The Radford University Foundation jump-started the organization with an initial $100,000 and has provided additional funding since the program's inception, Beach noted.

Under the direction of SMIPO faculty advisors, students decide how to invest and where to invest the SMIPO portfolio. Since its beginning, the student organization has been a tremendous success. In 2010, SMIPO delivered a 19.74 percent rate of return, trouncing the S&P 500 benchmark return of 15.06 percent.

SMIPO students have put their financial prowess to work in recent years against similar organizations from other colleges, competing in such events as GAME and the Redefining Investment Strategy Education (RISE) Forum held in Dayton, Ohio.

SMIPO performed well in the RISE international competition for several years in a row and on April 1, 2011, it earned first place in the Value Fund Category at the RISE XI forum. SMIPO‘s top placement resulted from its portfolio performance in 2010, with the fund producing the highest risk-adjusted returns in the Value Fund Category.
"It’s been so much hard work. The recognition for Radford is so well deserved with what the students and faculty have done," Beach said. "It’s probably one of the best returns on investment that this university could have ever made."