Scientific mystery and imagination merge as the Radford University Planetarium reopens for the 2015 academic year.

For a unique and evocative tour of the night sky, travel from the RU Planetarium in “Journey to the Stars,” a full-dome show featuring extraordinary images from ground and space-based telescopes and stunning visualizations of physics-based simulations. The show takes viewers through space and time to experience the life and death of the stars in the night sky, including the sun. Viewers will tour familiar stellar formations, explore new celestial mysteries and discover the unfolding story that connects us to the stars. The 25-minute show, narrated by Academy Award-winner Whoopi Goldberg, is a production of the American Museum of Natural History in conjunction with NASA. 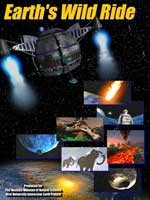 The RU Planetarium’s Saturday morning children’s show features “Earth’s Wild Ride,” set on the surface of the moon in the year 2081. “Earth’s Wild Ride” tells of a grandfather and his grandchildren who watch a solar eclipse from cliffs overlooking their moon colony. Conversation leads to contrasts between the moon, the only home the grandchildren know, and the Earth, where the grandfather spent most of his life. As the family watches the moon's shadow move across Earth, stories of crashing asteroids, erupting volcanoes, roaring dinosaurs, electrifying lightning, raging rivers and booming thunder are told. Each experience begins with a telescope view of the dynamic Earth in stark contrast with the unchanging lunar landscape. The 20-minute show was produced in collaboration with Rice University and NASA's Immersive Earth Project.

The RU Planetarium offers 32 reclined planetarium seats within its 24-foot diameter dome and can accommodate up to 45 people. To visit the planetarium at times other than its regularly scheduled showtimes or with a group, contact Rhett Herman at rherman@radford.edu.

All shows are free and open to the public. The planetarium is located in Curie Hall 43. Enter through Reed Hall from the main campus and follow the signs in the building. A complete RU Planetarium schedule can be found on their website.