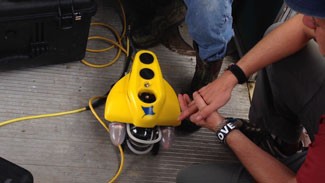 The team used an underwater remotely operated vehicle they nicknamed "Flipper" to explore the lake bed.

The Giles County lake is one of only two naturally formed lakes in Virginia and throughout history, the lake has fluctuated in size and has even been known to almost disappear. For most of the 20th century, the lake was a robust and near full pond, prompting the development of a resort community around the property.

Watts, Stephenson and geology majors Robert Huber and Ian Gammarino will speak about their research on the With Good Reason public radio program

The show airs Sept. 19-25 on With Good Reason stations, and Sept. 22 on WVRU. Programs also are available through podcasts at withgoodreasonradio.org.

An ancient landslide likely caused the natural dam that is now leaking and contains the water in the lake. From the team's efforts, a picture has been developed of the lakebed and the forces at work.

With Good Reason has twice won the Gabriel Award for Best Documentary/Public Affairs Program and is also the recipient of top honors from the Virginia Association of Broadcasters and a second place in the Public Radio News Directors' competition.

With Good Reason is produced by the Virginia Foundation for the Humanities for the Virginia Higher Education Broadcasting Consortium and is broadcast in Virginia, Maryland, Tennessee, Georgia, Alaska, California, Michigan and Washington, D.C. 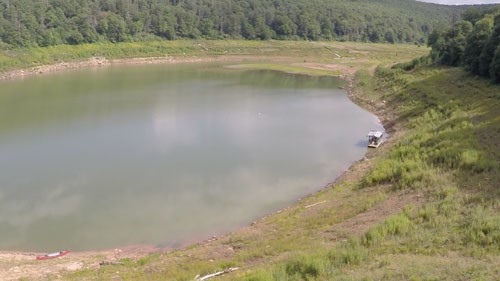 A team of Radford University faculty and students have been investigating the case of the disappearing Mountain Lake.