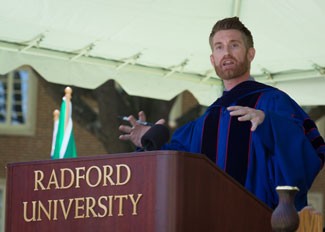 "Today is the greatest day of my life," said Matt Janssen, a management graduate from McLean.

Janssen's enthusiasm echoed throughout campus May 8 as proud families watched graduates take the stage and earn their diplomas.

"We are delighted to be here on this beautiful day celebrating you and your accomplishments," said President Kyle. "On behalf of Radford University, I offer my deepest congratulations to each one of you graduates. You have worked so hard for this, and you make us proud. I know as alumni, you will continue to do so."

Kyle also asked students to stand and recognize faculty and family who encouraged, supported and helped them succeed at the university.

Also offering words of encouragement and congratulations were Michael Wray, rector of the Radford University Board of Visitors; Jerry Kopf; professor and president of the faculty senate; Jennifer Jones; professor and Virginia Outstanding Faculty Award Recipient; and Colby Bender, president of the Student Government Association. 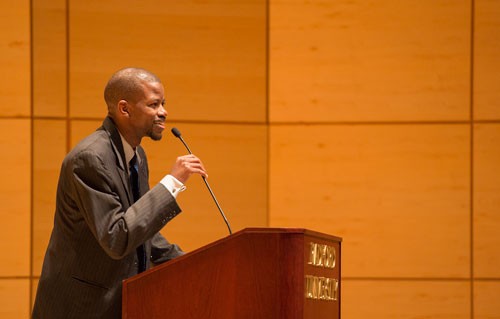 Kyle announced during the ceremony the faculty and student awards. Faculty recognized were:

A highlight of the ceremony was the heartfelt, inspiring and humorous commencement address from Smith, whose words resonated with both students and their families.

"It's good to be home," Smith said to the audience.

Smith is an ESPN bureau reporter based in Charlotte, North Carolina, reporting on a variety of sports.

"I have the sweetest memories of this place. They live in a Polaroid sort of fashion. They're foggy at times, but they have intense bursts of great clarity and vibrancy. I found love here. I found opportunity. I found direction. I found lifelong friends."

All ears tuned in on Smith as he talked about the value of a college diploma and shared some of the wisdom he has gained in the work force.

"A college diploma is a key that starts a car. All those keys look different...Some start Ferrari's and some start your grandma's Oldsmobile Cutlass '88. But they all move you forward to the destination you choose, and it's up to you to find its limits," he said.

While a student at Radford University, Smith majored in media studies and worked in the sports information office, where "the staff grew me up," Smith said.

"They built my self-esteem at a time I really needed it," he said. "They trusted me to get real-world work done…They believed in me. I felt that belief, and I've tried to pay that belief forward ever since." 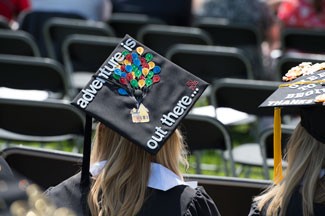 "I never thought this day would come, and it still feels so unreal. But, I’m so happy I made it and I’m here," said Taylor Wherrell, an elementary education graduate from Chesapeake. "Being a teacher is something I always wanted to do, and Radford is the perfect school to learn to be teacher."

Proud grandmother Judy Lassiter is very familiar with Radford University and the opportunities it provides, especially for granddaughter Annie Lassiter.

Annie's grandmother – on her father's side – and her mother are both Radford University alumni.

"They're all successful," Judy Lassiter said. "It's a wonderful school and we enjoy coming back here."

Many graduates agreed they feel confident in the future and prepared to face the "real world" because of the experiences they shared at Radford.

Megan Honaker, a senior nursing student from Damascus, will return next year to finish out a softball career and earn a certificate in bioethics. Honaker said she was grateful to Radford and called it a "special place."

"Radford University worked with me to make a path by which I could fulfill both my dreams – softball and nursing – and be successful."

Graduate C.J. Fedorowicz, of Broadway, wants to be a police officer. A criminal justice major, Fedorowicz is on track to make that happen.

"I've met a lot of influential teachers here and have made a lot of friends," he said.

Those friends and the memories they made are what Fedorowicz said he'll miss the most upon graduating and saying farewell to campus.

"Waking up, talking to friends, going to class then grabbing dinner together. That's the whole experience I'm going to miss," he said.

On Friday, May 8, the university held the 28th annual Graduation and Hooding Ceremony for students in the College of Graduate and Professional Studies.

Keynote speaker Sam Minner, Radford University provost and vice president for academic affairs, offered thoughts on the importance of a graduate degree, reminding graduates they have achieved a special distinction.

"In the lives of many people…attaining a graduate degree is among the most meaningful days in their experience," Minner said.

He went on to urge the new graduates to reflect on this personal achievement as a sort of "stained glass window" that will act as a colorful lens through which they see the world and the world sees them.

Other commencement activities on Friday included the ROTC commissioning of cadets as United States Army officers, the School of Nursing and Doctor of Physical Therapy pinning ceremonies for graduates and the Multicultural Congratulatory Ceremony in the Covington Center.

The Multicultural Congratulatory Ceremony, a tradition for nearly three decades, offered students a chance to reflect on the diversity of campus and the bonds they have forged in their time at Radford.

Frank Clark, a board-certified adult psychiatrist at Carilion Clinic/New River Valley Medical Center in Christiansburg, was the keynote speaker for the event.

"You will go forth and pursue opportunities," he told the graduates. "I know this because all of you sitting here in this room are leaders. I am proud to be here with you tonight."

The ceremony was sponsored by the Center for Diversity and Inclusion.

Individuals in the fields of science, technology, engineering, mathematics and health (STEM-H) made up 32 percent of those receiving undergraduate degrees.

The master’s programs with the most graduates were psychology, communication sciences and disorders, social work, educational leadership and education. 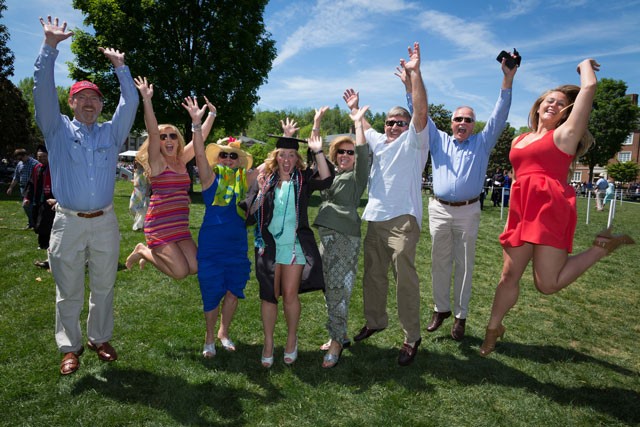