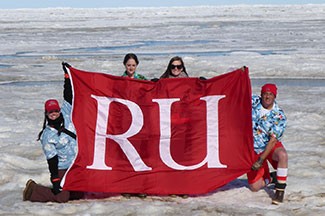 In June, a four-person team from Radford University ventured to Barrow, Alaska, on a research expedition to study factors influencing migratory bird survival in the rugged polar environment.

Radford's Professor of Physics Rhett Herman and Assistant Professor of Biology Sara O'Brien were joined by Jordan Eagle, a senior physics major, and Maddy King, a sophomore biology major. The foursome was trying to understand how the migratory birds that frequent the tundra as part of their annual summer migration and mating patterns select specific nest locations. The team was looking at the microclimatic conditions for clues to what criteria the mating pairs might use to select safe locations in the wind-swept, chilly tundra to raise their young.

"We were really interested in getting a transect across spots on the tundra that birds inhabited so that we could discern small area differences in microclimate from which we would perhaps elucidate the factors that might be influencing a bird's decision to nest here versus there," said O'Brien. "While it all looks the same to us…what the birds are experiencing on the tundra surface is very different."

The unique interdisciplinary research foray was the product of a chance faculty conversation in a Reed-Curie hallway and a College of Science and Technology Excellence in Research grant. An intensive four-week effort to develop a microclimate sensor array preceded the team's departure. 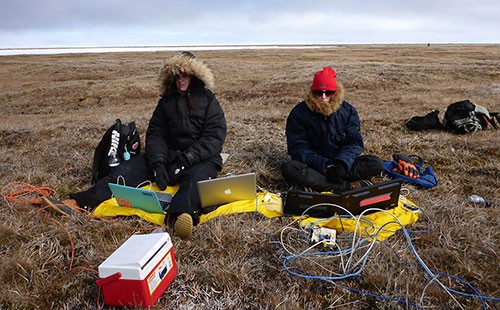 Maddy King and Jordan Eagle set up their own research "nest" while studying the microclimates of the polar tundra frequented by migrating birds.

"We tried to merge our disciplines and in the process learned to talk different scientific languages," said O'Brien, whose field experience included previous work in Alaska with its avian population, such as longspurs, shore birds and buntings.

The team spent seven days at the former Naval Arctic Research Laboratory on the shores of the Chukchi Sea where a Herman-led team of students spent two weeks in 2014-15 looking for a protocol to accumulate data by which it could assess the depth of the polar ice caps as a predictor of its health. The trip was Herman's first summer experience in Alaska, after four in the dead of winter.

Immediately after the spring commencement ceremonies, the two faculty and two students took the study's objective and set to engineering a protocol and technology to accomplish a microclimate assessment. The target microclimate was the size of a bird's nest on the treeless tundra. The team measured temperature, wind speed, humidity and light levels to anticipate what a bird pair might sense as they sought a nest site in which to lay eggs. Data was collected from a vertical sampling of the microclimate in small horizontal spots, within 1 meter of the surface, with extra emphasis on the first 20 centimeters. 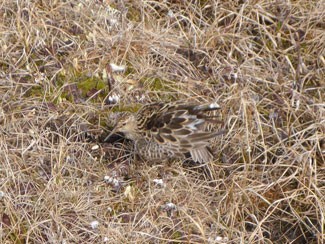 A Pectoral Sandpiper does a broken wing dance to lure members of the RU research team away from its nest in their work area.

"The design of the array was the result of a 10-day conception process," said Herman. "It was real science, being resourceful and collaborative. Real science is also troubleshooting. The team did plenty of that, too."

Eagle, a physicist with a flair for engineering, and King, a biologist with a love of the outdoors, set to work making the stake-mounted array that featured a series of sensors. They soldered, wired, programmed and tested four units once a solution was agreed upon and a prototype fashioned.

"It was very powerful to be part of a team all focused on a tough scientific question," said O'Brien, co-director of the Radford Ecophysiology Lab. "It was also great to see the lineage of women in science as I was joined by a senior and sophomore who are also focused on answering today's scientific questions."

A better understanding of the birds' ability to survive, adapt and propagate in a habitat impacted by rapid climate change would be a key potential ramification of this pilot study, O'Brien said.