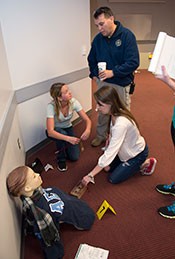 Radford University criminal justice students once again had the chance to show their skills as crime scene investigators at this spring's mock crime scene event.

On April 7, students in the "CRJU 320 - Criminal Investigative Theory" class, taught by Professor Tod Burke, encountered a staged crime scene. It was up to them to use techniques learned in class to control the scene, manage evidence and form conclusions about what happened.

The exercise took place from 11 a.m. to 12:15 p.m. in Heth 022. Upon arrival, students found a dummy victim waiting, with Easter paraphernalia – eggs, bunnies and more – strewn around the room.

"We're going to do everything we can to maintain a chain of custody and, hopefully, make a hypothesis as to what happened," Martin said. "An experience like this is as realistic as we can get without being at a crime scene."

The chain of custody Martin referred to is the control of the scene investigators try to maintain from their arrival through the delivery of clues to the evidence room. Weak links can waylay an investigation or give rise to challenges in court. 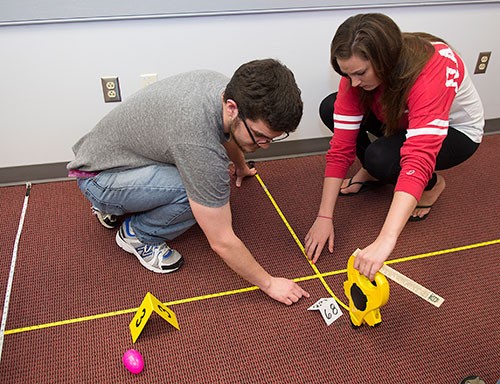 Members of the Radford University Police Department and local media outlets were also on hand to "interfere" with the crime scene and add a challenge for students. They also assisted in debriefing the class following the exercise.

Students were placed into working groups for the event, each representing the typical responders to a crime scene. Security officers, photographers, sketch artists and detectives all had a hand in the exercise. 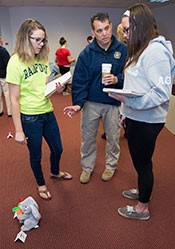 Brianna Cope, a junior criminal justice major, was one of several students assigned to the evidence room, where they would be charged with cataloguing and securing all evidence brought in from the crime scene.

"We learned about the chain of custody in this class and we have such an important part to play in that," Cope said. Her team didn't get to spend as much time with the crime scene as other teams did, instead learning about the crime through the evidence others checked into the room. "It's a different experience, like reading a book instead of watching the movie version."

For criminal justice major and senior Kayla Lewin this wasn't the first rodeo she's attended. In Fall 2014, she was part of a class that performed a simulated arson investigation. Lewin said that she's learned that the principles of investigation remain the same, even in different context.

"Whether it's a fire or a crime scene, the procedure is the same," she said. "Our job is about securing the scene, protecting the evidence and hopefully figuring out what actually happened."