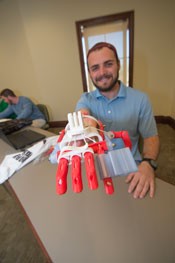 A prototype of a 3D prosthetic hand from one of the winning teams in this year's Shark Tank Competition.

Radford University students enrolled in Iain Clelland's Managing New Venture Creation (MGNT 450) class took on a unique and interesting challenge this semester: Designing and then building a mechanical, prosthetic hand from one of the 3D printers housed in the university's College of Business and Economics.

Clelland's goal for the project was to give his students a high-impact learning opportunity that converged business, technology and health care.

For the assignment, the professor challenged his students to simulate establishing a startup company that, after significant research and data collection, would design and print various types of prosthetic hand prototypes, and then market and sell the products.

"Each management team developed a business model for a company that would attempt to sell the product they developed," Clelland said. "So, they had to identify their target customers, the market size potential and design a customer value proposition expressed in the prototype."

Clelland's students were well versed in the business end of the project, but they needed assistance in designing functional prosthetics to meet patient needs.

That's were Julia Castleberry's doctor of physical therapy students came into play. Castleberry, an assistant professor in Radford University's Doctor of Physical Therapy (DPT) program, and her students – there were two or three for each team – provided guidance and consultation for the design and development of the 3D-printed prosthetics. 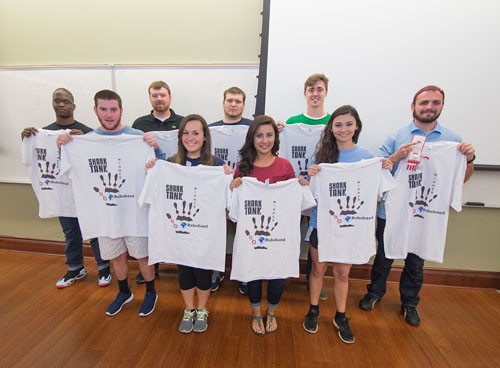 The management students learned about patients' functional needs for prosthetics, and the DPT students gained an awareness and understanding "that certain medical devices can be created as low-cost, consumer products," Clelland said.

The project began in February when Clelland invited Robohand USA Director Ty Esham to campus to speak about the commercial viability of printing 3D prosthetics. Robohand, an Atlanta-based non-profit organization, provided hardware kits and medical plastic to enable assembly of the prototypes to each of the 10 teams.

Throughout the semester, each team researched, designed and built a prosthetic hand they hoped would best benefit and serve the prosthetics and consumer product markets.

The final component of the project for the management students was an end-of-semester competition, based on the popular TV show Shark Tank, in which each student team pitched their ideas to two potential investors who also served as judges.

The students' pitches were an attempt to persuade the investors to provide capital for the startup business in exchange for a percentage of ownership in the business.

The competition spanned two days of classes, with five teams presenting each day. The investors each had $2 million to divide among the five teams.

"The project did a great job of getting the students involved in the whole process of trying to start a company," said investor/judge Kevin Reeder of First Bank and Trust. "The students also did a good job of identifying their target audiences and figuring out who would be their customers. It's a great process to get them involved in the whole aspect of trying to start their own business."

For the competition, one first place and one second place team was awarded by the judges each day.

Ben Sigmon of Virginia Prosthetics served as a judge for day two of the competition and said the participating students "did a lot of research and learned a lot" from the project. Sigmon, a certified prosthetist and orthotist, noted that many of the prosthetic hand attachments developed by the students could "be useful for the 3D printed hands that are coming available."

With the competition finished, Castleberry's physical therapy students will re-enter the project, she said.

"We are exploring the possibility of a research study to review these prototypes with Virginia Prosthetics with a potential client," Castleberry said. "In addition, this collaborative project has engaged the physical therapy students in considering how potential health care devices can be developed and marketed. 3D printing is here; now we need to learn how to capitalize on its potential."