Led by Department of Criminal Justice Professor Emil Moldovan, seven student teams of three held a mock CSI competition based on the 1849 Parkman-Webster murder case, one of the first historical investigations to use forensic science.

"Most of the students who are participating are upper division students who have gone through a series of our classes and really put to work what they learned in the classroom," Moldovan said.

Teams were expected to behave like their professional law enforcement counterparts, collecting evidence and interviewing suspects.

News crews were on hand to capture the event, offering students a chance to experience talking to the media, an unplanned bonus element to the experience.

WSLS 10 in Roanoke aired coverage of the event on March 22, highlighting the experiential learning opportunities offered by Radford's Department of Criminal Justice.

WDBJ7 in Roanoke was also on hand to profile the student work that really made the exercise come to life.

“It takes a lot of hard work and time just to go through and see everything and notice everything and make sure you don't leave anything out,” student Morgan Dean said in an interview with WDBJ. 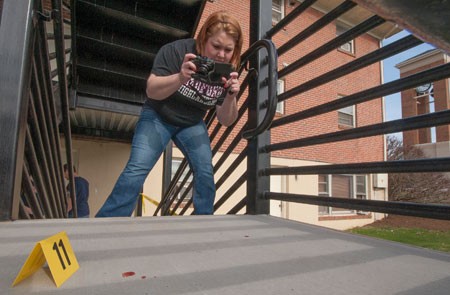 Parker Stinnett photographs part of a "blood" trail up the steps at the Criminal Justice building as she and her teammates take part in a Crime Scene Investigation competition.