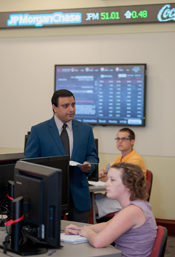 Since publishing his research article "Performance and Persistence of Performance of Actively Managed U.S. Funds that Invest in International Equity" this summer in The Journal of Investing, the Radford University associate professor of finance has received what he calls a "healthy discussion among portfolio managers and fund advisors."

Kaushik's research article, currently the most-read article on The Journal of Investing website, "analyzes the abnormal performance of actively managed U.S.-domiciled funds that mainly invest in international stocks over the period 1992–2011," the College of Business and Economics professor explained. His research has found that active funds in international markets surpass their benchmarks at a better rate than do actively managed domestic funds.

Kaushik, who has been teaching at RU since 2007 and was this year's winner of COBE's Outstanding Faculty Award, found that funds in nine of the 13 categories he examined beat their benchmarks based on total returns and risk-adjusted returns.

Many of the experts airing their opinions about Kaushik's research represent some of the world's largest investment firms – Dimensional Fund Advisors, the BAM Alliance and Morningstar, Inc., to name a few – which manage billions of dollars in assets, Kaushik noted. Much of the debate of Kaushik's research findings has played out on national media platforms, such as CBS News Moneywatch and the websites Morningstar and Motley Fool.

"I didn't know it would turn into such a buzz," the professor said.

A number of experts agree with the professor's research, but not all of them. Kaushik would not have it any other way.

"Some of them don’t completely agree with my findings and some others agree, and I believe it is a very healthy sign," Kaushik said. "I believe the cornerstone of the academic research is to stir debate among academics, practitioners, industries, regulators and others on important issues."

Debate over Kaushik's findings, he said, will keep him striving for more answers in his research.

"The recent debate that my article has created has given me a strong motivation to keep working on the important issue of investment in mutual funds in which nearly 90 million American people have put their hopes," Kaushik said.

In the past six years, Kaushik has published more than 10 journal articles, presented to 10 different professional audiences, contributed to a half-dozen professional organizations and served as the advisor to two student organizations.

Kaushik chairs Radford University's Resource Allocation Committee and recently was approved for tenure by the RU Board of Visitors. He also has been selected to serve as faculty advisor for COBE's Student Managed Investment Portfolio Organization (SMIPO).