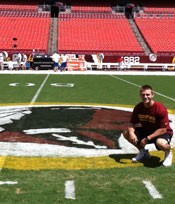 Battered and bruised, Washington Redskins players filed into in the FedEx Field locker room at halftime on a Sunday afternoon in late October. The Washington club was in a tough struggle with the Bears from Chicago, and the gridiron warriors fighting for 'ol D.C., had the wounds to prove it. They had doled out their share of slobber knockers, but they had absorbed just as many.

Through 30 game minutes of football, Washington had battled to a tight 24-17 lead. In the locker room, the team’s coaches instructed players about game plan adjustments necessary for holding off the Monsters from the Midway.

During these tense moments when players were trying to catch a breath and grasp strategy changes, Trevor Stewart '13 had only a few minutes to fight through the chaos and complete his task of "pushing fluids" to Washington players and dressing wounds suffered on the field to assure all 53 players were ready, for 30 more game minutes, to withstand enormous punishments to their bodies in pursuit of victory.

A May graduate from RU's Athletic Training Program, Stewart is working as an athletic trainer intern this fall for Washington’s home games. Part of his job is to tape injuries, treat and cover wounds and gashes and to ensure the players under his care remain hydrated throughout the game, which in real time, can last about three and a half hours.

Stewart landed the extended internship with the NFL team after impressing his supervisors throughout his summer internship with the team during its training camp and preseason. Out of a tall stack of applicants from around the United States, he was one of only four selected for the coveted athletic training positions.

Stewart logged long hours during his internship – "I worked from 6:30 in the morning to 11 at night," he recalled – but gained valuable hands-on experience. He helped players rehab injuries, maintain fluids, track weight loss and stretch while also taping injuries and working with other athletic trainers to restock materials.

"I basically learned how to run my own athletic training room," said Stewart, who praised the Washington staff for teaching him "new techniques with rehabs, taping and showing us the behind-the-scenes operations it takes to keep everything running smoothly."

During the internship, Stewart worked with most of the Washington players, and occasionally had the opportunity to work with star quarterback Robert Griffin III, who was rehabbing, under an intense national spotlight, a serious knee injury suffered in a playoff game in January.

Interacting with Griffin and the numerous other players added thrill and excitement to the learning experience for Stewart, a long-time fan of the Washington team.

Stewart credits his professors and the athletic training curriculum at RU for giving him the knowledge and tools necessary to score the summer internship and work with the professionals in the National Football League.

"My education at Radford was a great preparation for the internship," said Stewart, who now is pursuing a doctorate of physical therapy at Marymount University in Arlington. "I got there [with Washington] and was able to step right in and be comfortable with everything we were doing as athletic trainers."

At Radford, Stewart, like all students in the athletic training program, had the opportunity to work as an athletic training student with various Highlanders teams. "That really helped me when working with the Redskins because I had seen many different aspects of athletic training and actually had been in the situations to perform."

Michael Moore, an associate professor in the Department of Health and Human Performance, said Stewart was an enthusiastic student at RU who always wanted to learn. "He was an excellent athletic training student in the classroom and clinic," Moore said. "He will be an outstanding athletic trainer and alumni of Radford University and an ambassador of our Athletic Training Education Program."

Treating and preparing banged-up and fatigued Washington players to go back onto the field in front of 80,000 screaming burgundy-and-gold-clad fans is a "rush" for Stewart, particularly when the home team wins, as it did in thrilling fashion, 45-41, over the Bears in their October clash.

"I was there for the last-second win, and it was an intense moment on the sidelines," he recalled. "It was awesome to be part of that celebration with the players and the rest of the staff."