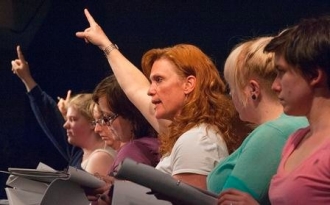 Over the past 15 years, "The Vagina Monologues" has become one of the world's premier pieces of activist theatre. Now, as Radford University celebrates Women's History Month, the play returns to campus to help stimulate conversation and benefit the women of the New River Valley.

"The Vagina Monologues" will be performed in RU's Hurlburt Student Center auditorium on March 27, 28 and 30 as one of the closing events of the monthlong celebration. The play famously addresses a range of women's issues, including childbirth, sexuality, hygiene, rape and the many different names for the title body part.

"It still is such a taboo subject," said Lucinda McDermott, the show's director. "We're so afraid to use the word 'vagina,' but violence against women is proliferating around the world. There's a real disconnect."

McDermott, a playwright, director and former RU faculty member, is directing "The Vagina Monologues" at Radford for the fourth time, using a diverse cast of eight women from across the region. In addition to local community members and students from both Radford and Wytheville Community College, the show will feature performances by three RU faculty members.

The show consists of a series of monologues, all of which deal in some way with a women's experience with the vagina. Although the monologues are alternatively humorous and heartbreaking, they are all the stories of real women, collected and curated by playwright Eve Ensler.

"Some of the pieces are profound in either their sadness or humor, but the humanity is rich,” McDermott said. "Whether you're male or female, you realize we are all in some way broken, in some way hurting, in some way searching to heal. There is something you're going to relate to."

Playwright, performer and activist Ensler premiered "The Vagina Monologues" in 1996. The play, which comprises monologues from an annually expanding pool, successfully captured the attention of audiences with its brazen language and honest look at women's issues. Initially, the forthright use of the word "vagina" embarrassed some audience members, McDermott said, and students would go red when the show was mentioned in her theatre classes.

"It's lovely to see the awareness growing," McDermott said. "Now the girls get very excited. The activism is awakened in them. We sell out the shows."

In 1998, Ensler used the show as a cornerstone of V-Day, a global activist movement and organization dedicate to ending violence against women around the world. Thousands of V-Day benefits take place each year, often as performances of "The Vagina Monologues."

To celebrate V-Day's 15th anniversary, a new video will be featured in "The Vagina Monologues" this year. Called "One Billion Rising," the short film shows women around the world rejecting violence and subjugation, and standing as a force to be reckoned with. The addition of "One Billion Rising" into the program of "The Vagina Monologues" marks the first time the show has been a multimedia theater event.

"It's a real feature this year," McDermott said. "It's an example of how much the show has changed."

All performances at RU are free, but donations are accepted, with 90 percent of the gifts going to the Women's Resource Center of the New River Valley. The rest of the donations are sent to V-Day to build hospitals and clinics and fund international anti-violence initiatives. Donations in the past have raised about $3,000 for the Women's Resource Center, McDermott said.

Even after nearly two decades of performance, "The Vagina Monologues" is still an effective way to raise awareness about women's issues, she said. "It is performed in the spirit of 'I'm doing this to make the world a better place.' If we touch one person out of an audience of 500, we've done our job."

"The Vagina Monologues," presented by the RU Women's Studies Club, will be performed in the Hurlburt Student Center Auditorium on Wednesday, March 27, and Thursday, March 28, at 6 p.m. and on Saturday, March 30, at 2 p.m. Associate Professor Erin Webster Garrett will offer final reflections on Women's History Month at the university preceding the March 30 performance.