How to make a million dollars

It's a milestone Josh Eggleston, president of SMIPO, and his colleagues in the 20-person organization have been eyeing for a while, particularly since the value reached a SMIPO record $975,000 in late July.

"I am very proud of this accomplishment that SMIPO has reached today; years of hard work have finally paid off," said Eggleston, senior economics major from Buena Vista. "We have been on edge this last couple of weeks waiting for this milestone. Reaching $1 million was my goal for SMIPO this year, and I am amazed that we reached it this fast."

In the days leading up to the benchmark, the digital ticker in the College of Business and Economics (COBE) trading room had read "March to a Million."

SMIPO has performed well in relation to the Dow Jones Industrial Average Index and the Standard & Poor's 500. After reaching its all-time high in July, the organization hit a small September dip, but rebounded in October to reach the $1 million mark.

"Radford University students have benefitted greatly from the confidence shown in them by the Radford University Foundation, which has entrusted them with the incredible responsibility of managing a million dollars," said Steve Beach, associate professor of finance. 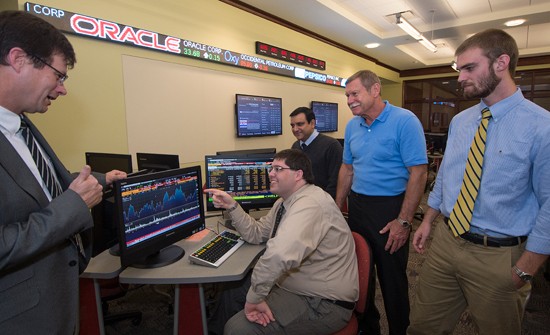 SMIPO provides COBE students an opportunity to gain practical experience in the management and decision-making processes of a corporate structured organization by participating in hands-on management of the funds of Radford University Foundation's endowment.

The organization was founded in 2002 by Professor of Finance Clarence C. Rose and Beach for the primary purpose of providing RU students with the opportunity to gain real-world investment and portfolio management experience, Rose explained.

"When we were putting this organization together, one of our goals was to eventually have $1 million under management by SMIPO, and a lot of our students and the faculty advisors have worked very hard over the years to make this happen," Rose said.

The Radford University Foundation jump-started the organization with an initial $100,000 and provided additional funding since the program's inception, Beach noted.

Under the direction of SMIPO faculty advisors, students decide how to invest and where to invest the SMIPO portfolio. Since its genesis in 2002, the student organization has been a tremendous success. In 2010, SMIPO delivered a 19.74 percent rate of return, trouncing the S&P 500 benchmark return of 15.06 percent, Rose noted.

SMIPO students have put their financial prowess to work in recent years against similar organizations from other colleges, competing is such events as the Redefining Investment Strategy Education (RISE) Forum held in Dayton, Ohio and the Global Asset Management Education (GAME) Forum held in New York City.

SMIPO utilizes resources provided by the trading room in RU's new College of Business and Economics Building to build upon its success. The trading room is equipped with a Bloomberg Terminal, Datastream, Morningstar Direct and other financial analytic tools to enable students to channel their financial abilities into making sound business decisions.

Many SMIPO alumni have taken on successful roles after graduating from Radford. One is the chief executive officer of a bio-tech firm, another is a chief financial officer of a credit union, several alumni hold the Charter Financial Analyst designation, and many work in the financial services industry, Beach noted.

"SMIPO is a jumpstart for many students on their career paths," Beach said. "Besides managing money, they learn to manage this business organization and develop both technical and managerial skills that make them highly employable."