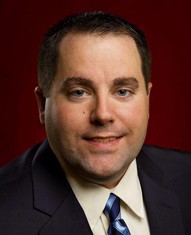 In the fall edition of "The Independent Review," Duncan and his co-author Christopher J. Coyne, an economics professor at George Mason University, define the permanent war economy and explain its origins in the U.S.

"The U.S. routinely spends around $700 billion on defense each year, more than any other nation by a substantial margin," the authors explain. "The level of spending spiked during World War II, dropped dramatically for only a three year period at war’s end, and then rose to a level of continuous defense spending that has remained far higher than the levels of continuous defense spending in the pre-war period."

Their paper, "The Origins of the Permanent War Economy," examines the political economy of national defense in order to understand what changes took place in the institutional structure of the United States that would lead to such a dramatic difference.

"We emphasize the combined efforts of three key interest groups (military, labor unions and industry) that arose in the context of the dual crises of the Great Depression and World War II," Duncan and his co-author write. "During the depression and the war that followed, there arose a partnership between industry, the military and politicians. These crises, combined with the State’s monopoly over the military, created the opportunity for these interests to influence the trajectory of economic activity in a self-serving and lasting manner."

"The Origins of the Permanent War Economy," Duncan said, provides great detail into the benefits provided to groups and "how those interests came to form what Milton Friedman referred to as an ‘iron triangle’ in favor of making the war economy a permanent feature in the American landscape."

"The Independent Review" is the acclaimed interdisciplinary journal devoted to the study of political economy and the critical analysis of government policy. The journal publishes articles in the fields of economics, political science, law, history, philosophy and sociology.

Radford University is a comprehensive public university of more than 9,900 students. RU serves the Commonwealth of Virginia and the nation through a wide range of academic, cultural, human service, and research programs. Well known for its strong faculty/student bonds, innovative use of technology in the learning environment and vibrant student life on a beautiful 191-acre American classical campus, Radford University offers students many opportunities to get involved and succeed in and out of the classroom. The university offers 69 degree programs at the undergraduate level, and 21 master's programs and three doctoral programs at the graduate level. A Division I member of the NCAA and Big South Athletic Conference, Radford participates in 19 varsity sports—11 for women and eight for men. Since 2005, the university has secured approval and funding for nearly $300 million in capital projects, including both new construction and renovation.